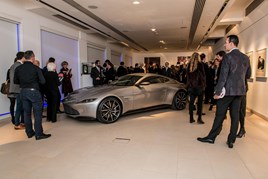 A buyer has paid more than £2.4 million for a rare Aston Martin DB10 made for the latest James Bond film, Spectre, in a charity auction at Christie’s in London.

The final bid of £2,434,500 gained the buyer a piece of automotive history; the only Aston Martin DB10 to be made available for public sale.

The DB10 supercar gives a glimpse of the future design direction for the next generation of Aston Martins, and production was strictly limited to 10 models for the latest Bond film, Spectre.

Eight of the DB10s were modified for filming, but two of those produced were kept back as show cars for display purposes only and the car auctioned was one of those.

The money raised by the auction of the Aston Martin DB10 will benefit Médecins Sans Frontières.

Aston Martin chief executive Dr Andy Palmer said: “The DB10 is one of the rarest cars ever created. Only 10 will ever be made and this is the only one that will be made available for sale. It’s great to see this DB10 raising vital funds for Médecins Sans Frontières, it is a fantastic charity that we are delighted to support.”