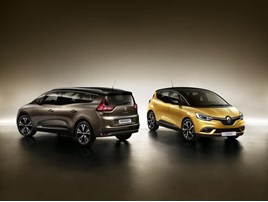 Renault has added the five and seven-seat Grand Scenic to its new MPV model line-up.

The standard five-seat Scenic was revealed in March at Geneva, notably featuring 20-inch wheels as the standard fitment across the range.

The all new Grand Scénic, a family vehicle par excellence, comes with either five or seven seats and features a fresh approach in term of its design, including:

A One Touch Folding Seat function allows the rear seats to be folded automatically to obtain a flat floor and facilitate loading.

The new Grand Scénic comes with a comprehensive suite of driver aids, including Active Emergency Braking (AEBS) with Pedestrian Detection as standard equipment for the first time in the segment.

The list continues with technologies from the next segment up, such as Multisense experience, a R-Link 2 multimedia tablet complete with a large 8.7-inch display and a full-colour head-up display.

The fourth generation of the model can also be specified with Renault’s Hybrid Assist electrified diesel engine.

The final UK model-line up for both vehicles, version specifications and pricing will be announced to the on sale date later in 2016.