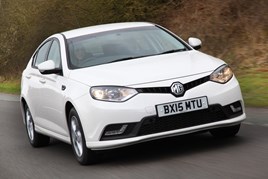 MG has confirmed that it will remove its MG6 hatchback from sale later this year as it targets success in the SUV sector.

The Longbridge-based manufacturer, which is owned by China’s Shanghai Automotive Industry Association, was relaunched on the back of the MG6’s initial launch in 2010 and the car underwent a further refresh in April last year.

But following MG’s launch of the GS SUV last month, it has now announced plans to pursue a new direction and the MG6 is no longer part of its plans.

A spokesman confirmed that production of the MG6 will cease in September.

The spokesman added: “The MG6 was MG Motor UK’s first new model vehicle to be launched from Longbridge and it was the car that revived the company.

“However, the automotive market looks very different now with more and more consumers looking to SUVs; which is a growing segment of the market.

“With this in mind, we have just launched a fantastic SUV. Next year we will be launching another model, which will be a B-segment SUV.

“We fully expect MG6 customers, when they look to change their vehicle, to choose the MG GS.

“We’ve got more models coming in the next few years, with 450 people based at Longbridge working on the design and engineering of these new vehicles.”