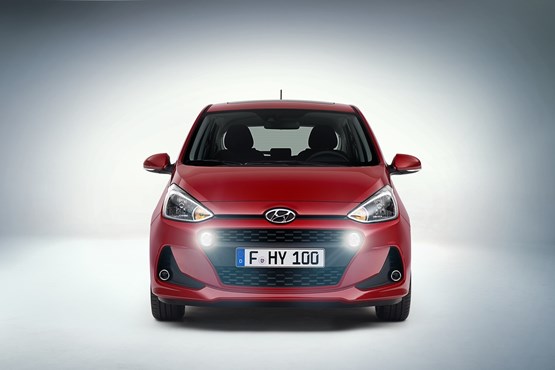 Hyundai’s third-generation i10 supermini is set to make its public debut at the Paris Motor Show after the Korean brand revealed details of its new design language and specification.

Apple CarPlay and Android Auto will be offered via a seven-inch touchscreen infotainment system including satnav with sign recognition and live traffic updates as part of an updated package.

Premium safety equipment including optional lane departure and collision warning stystems have been ushederd in with the introduction of a new multi-functional camera on top trim models, meanwhile.

“New i10 showcases strong build quality and our passion for detail, while also including many features from the segments above,” said Tony Whitehorn, president and chief executive of Hyundai Motor UK Ltd.

“The impressive package has made the i10 one of the best-selling cars in its class and popular with customers across the UK – a success story that the New i10 is set to carry on.”

Hyundai has also enhanced the appearance of the i10 in its second iteration.

A design “characterised by its curved natural flowing line” also features a cascading front grille, features which are set to become the new family identity for Hyundai models.

A new bumper design features round LED daytime running lights, positioned at the edges of the new grille.

At the rear, an evolved bumper design includes round rear fog lamps mirroring the new front design and redesigned side mouldings.

Inside, the new i10 comes with a new shade of red cloth. Customers will also be able to choose from blue and black interior colours on all trims.

The i10 will be available with the same range of powertrains as its predecessor.

A BlueDrive™ model, based on the 1.0-litre petrol variant, includes a number of features to reduce fuel consumption.

The original i10 achieved over half a million sales between 2008 and 2014 while the second-generation car – designed and developed at the Hyundai Motor Europe Technical Center (HMETC) in Rüsselsheim, Germany – has yielded more than 220,000 registrations in three years.