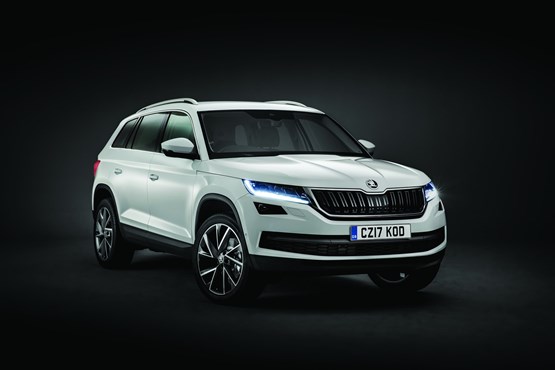 Skoda is has revealed how it plans to “strike out in a new direction” with the first official images of its first D-segment SUV – the Kodiaq.

Originally revealed in the form of the VisionS concept at the 2016 Geneva Motor Show, the seevent-seat SUV will go on sale in the UK in Q1 of 2017 with a choice of five engines, three possible transmissions and two- or four-wheel-drive.

Skoda chief executive Bernhard Maier said: “With the Kodiaq, we are striking out in a new direction and opening up new markets.

“With our first large SUV, we are conquering a new segment for the brand – and new customer groups. Our new addition to the model range is truly as strong as a bear.”

The 4.7m long Kodiaq features a long wheelbase (2,791mm) and short overhangs, pointing to the large interior which boasts a 720-litre boot.

A choice of 14 paint finishes is available – four standard colours and ten metallic colours – across Active, Ambition and Style trims.

Built on the Volkswagen Group’s MQB platform, Skoda claims that the combination of entry-level TSI engine and front-wheel-drive in the Kodiaq results in a kerb weight of just 1,452 kg (without driver).

A two-litre TDI is available in 148bhp and 187bhp, the entry-level TDI engine claiming fuel economy from 56.5mpg and 131g/km CO2 emissions.

The more powerful diesel engine accelerates the large SUV to 62mph in 8.6 seconds and reaches a top speed of up to 130 mph.

Two 1.4 TSI engines and one two-litre TSI engine make up the petrol-powered options.

In 148bhp guise the 1.4-litre features the Volkswagen Group’s ACT system – Active Cylinder Technology – to shut down the second and third cylinders when the load and engine speed are low.

The ŠKODA Kodiaq is available with a 6-speed manual gearbox or DSG transmissions with six or seven speeds, depending on engine choice.

Driving Mode Select is available in the new Kodiaq, tailored to either four- or two-wheel-drive options.

It allows the driver to tailor the gearbox, steering  and other systems in Normal, Eco, Sport and Individual modes. All-wheel-drive versions also offer a Snow mode.

Inside the Kodiaq, Skoda’s designers have created a series of large circular instruments have a precise and clear design.

Tri-zone climate control and heated leather seats are among the specification highlights.

Skoda Connect brings new levels of connecitiy to the brand, providing online infotainment and real-time navigation details. A Care Connect system will also offer remote access – allowing route plans to be sent to the vehicle from a remote device – as well as assistance in the event of an emergency.

For the first time, the SmartLink all-in-one app also integrates SmartGate alongside Apple CarPlay, Android Auto and MirrorLink. The system offers navigational data, music and news as well as all relevant vehicle data via the car’s infotainment system.

In TDI/DSG/4×4 form, the Kodiaq will tow a trailer weighing up to 2.5 tonnes with an electrically retractable tow bar and features a Trailer Assist system.

Surround-view cameras located in the front and rear also give a view of obstacles around the vehicle.

Front Assist including City Emergency Brake is among the standard safety equipment and is active up to speeds of 21mph. Adaptive Cruise Control, Lane Assist, Blind Spot Detect and Rear Traffic Alert also part of the Kodiaq’s safety kit.