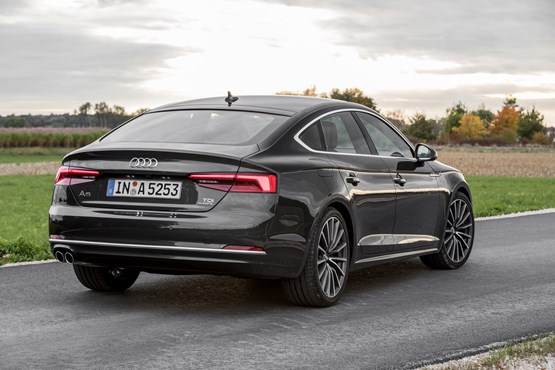 Audi has revealed its new A5 Sportback, a more fleet friendly five-door version of its popular A5 coupe.

New engines contribute to a 22% reduction in fuel consumption and a 17% increase in power and both two and four wheel drive options are available.

The car’s technology includes virtual cockpit, Audi's new digital dashboard which debuted on the R8 supercar and has been introduced across latest models.

It also benefits from advanced assistance systems such as traffic jam assist which can control acceleration and braking at speeds up to 40mph and active lane assist which can steer the car if it strays out of a lane - a hint that the brand is working on increasing autonomy.

Customers can choose between two TFSI petrol and three TDI diesel engine versions for the new A5 Sportback. They produce between 187bhp and 282bhp.

There will also be a flagship Audi S5 Sportback, which has a new V6 turbocharged TFSI engine with an output of 350bhp and 500nm of torque.

The flagship infotainment version is MMI navigation plus with MMI touch. It includes such features as 10GB storage, a DVD drive, Audi connect services and an 8.3-inch high resolution monitor. Plus there is a 19-speaker 755-watt Bang and Olufsen Sound System which is designed to give the driver the sense of sitting in a concert hall.

The A5 Sportback will make its debut at the Paris Motor Show at the end of September, where more prices and specifications will be available.

Audi A5 and A6 Sportback