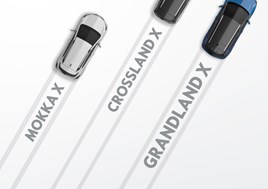 Vauxhall has confirmed the name of a third SUV model which is set to join the Mokka X and forthcoming Crossland X in 2017.

The Grandland X will sit next to the Mokka X SUV and Crossland X and will “boost Vauxhall’s credentials in a segment which is one of the fastest-growing in the UK’s car market”, according to the brand.

“We now have a compelling trio of new models for 2017 that are bang on target for a sector that has seen more growth recently than almost any other in the UK,” said Rory Harvey, Vauxhall’s chairman and managing director.

“The range now covers all bases, from an all-wheel-drive SUV to a choice of two highly practical and stylish crossovers, with different levels of space and equipment.

“Both the crossovers are incremental to Vauxhall’s existing range, so along with the new Insignia Grand Sport and its derivatives, 2017 is shaping up to be one of our busiest years ever for new product.”

Since 2012, the Mokka (which has recently been replaced by the new Mokka X) has found more than 120,000 buyers in the UK, its single biggest market in Europe.

The Grandland X and Crossland X are set to bring still more growth when they go on sale in 2017.

The new model comes as part of a clutch of five new product launches throughout the new year, with images on the new Insignia having already broken cover.

Vauxhall will launch a new flagship model with the introduction of the new Insignia Grand Sport, a large and practical five-door hatchback, with a coupe-like silhouette.

The new Insignia Sports Tourer will follow before a Country Tourer model completes the line-up with all-wheel-drive as standard and off-road looks.

Vauxhall’s recently launched Mokka X will be joined by the new Crossland X at the start of next year with dates for the launch of the Grandland X yet to be announced.