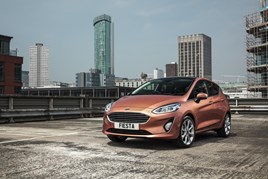 The first new Ford Fiesta destined for a customer has been delivered to Birmingham after docking in Dover.

Ford revealed this week that, of the 120,000 Fiestas registered in the last 12 months, 70% were five-door models, 90% petrol and 60% the Zetec trim level, while 20% of customers chose the Titanium series.

Red, white and blue are three of the four favourite Fiesta colours among patriotic UK customers.

Chrome Copper (pictured), Blue Wave and Bohai Mint green shades are among the colour choices for the new Fiesta, which enters showrooms this month.

Pre-Collision Assist, featuring pedestrian detection, is among the new technology on the vehicle.

The system warns the driver of people who are in or near the road ahead and facilitates automated perpendicular parking, blind spot alert and auto high beam.

Andy Barratt, Ford of Britain chairman and managing director, said:  “This year the eyes of the car world in our market are on new Fiesta as it takes over the reign as top seller.

“Having seen all Fiesta models coming over the next nine months, I’m confident it will remain on top.”

Joining the Ford Fiesta’s core range of Zetec and Titanium in dealerships this month will be sporty ST-Line and luxurious Vignale models in early autumn, both offering the acclaimed 1.0 EcoBoost 140PS engine, followed by an all-new Active crossover and hot ST in spring next year.