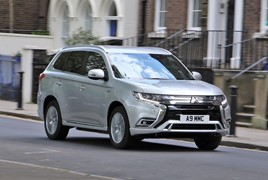 Mitsubishi has reached a milestone of 50,000 Outlander PHEV sales since the car went on sale in April 2014.

The plug-in hybrid SUV is now in its third generation and continues to attract both private buyers and company car drivers.

Such is the Outlander PHEV’s popularity, it hold the title as both the UK and Europe’s best selling plug-in hybrid model.

Mitsubishi says with a growing acceptance of the need for people to adopt more sustainable lifestyles, the role of the plug-in hybrid has never been more important.

A recent survey of Mitsubishi Outlander PHEV customers found that 90% charge regularly, 68% charge daily and, overall, more than half the average daily mileage is driven in Electric Vehicle mode, reducing fuel use, lowering emissions and improving air quality in urban areas where conventional internal-combustion engines are at their least efficient.

The latest-generation Mitsubishi Outlander PHEV is fitted with a 2.4-litre, Atkinson-cycle petrol engine and a more powerful, higher-capacity EV powertrain to help it achieve WLTP CO2 emissions of 46g/km and provide a 28-mile EV range.

With the average daily commute in England and Wales less than 10 miles each way, the manufacturer says it is entirely possible for most owners to drive to and from work without ever using a drop of petrol in the process.