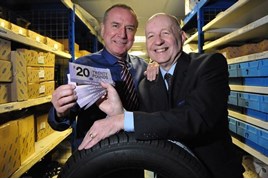 Parts advisor Allan Etherington has been rewarded for his loyalty after half a century of service at the same dealership.

Etherington started work at the Selwoods dealership on Newcastle Road, South Shields in 1966 – now Jennings Ford Direct –has remained in the same job ever since stepping into the role fresh from school.

Etherington said: “I’ve always enjoyed everything about my job and I get on with my work colleagues who, over the years, have become good friends, so there’s been no reason for me to find alternative employment.  I have worked with some of my colleagues for more than three decades.

“We have a good team at South Shields and a good manager within the parts department.  If you’re happy in your job, why change it.”

When Jennings Motor Group took over the branch in 1995, it was made company policy to recognise and reward those members of staff with previous years served.

Jennings Motor Group reward staff after 15 years’ loyal service, they then receive official recognition for every five years’ service after that.

In his role as a parts advisor, Etherington is responsible for liaising with existing and potential customers, processing orders and meeting deadlines, in addition to also spending time out and about on the region’s roads delivering parts to customers.

Recalling how things have changed over the years, he said: “When I first started working in the parts department everything was done manually, but nowadays everything is all computerised.

“Today’s advanced technology, enables us to order and process items quickly and provide a much more efficient service to our customers, which is constantly improving, in addition to being able to utilise our time more effectively.”

The favourite part of the job for Etherington is talking to his customers, he added; “The customer-facing part of the role has always been the most enjoyable for me.”