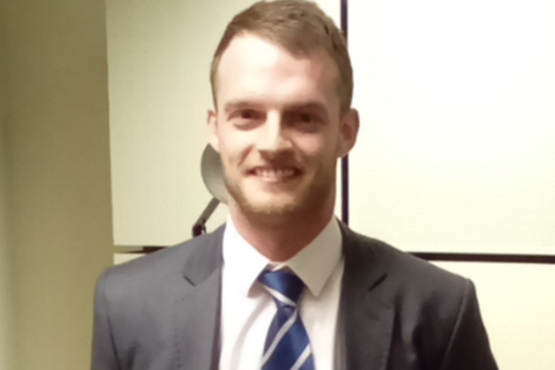 Car salesman and Jamie Vardy lookalike Ian Haughey has told AM of his surprise at being mobbed by Leicester City fans on the night of the team’s historic Premier League title win.

The Stratstone BMW Derby new car sales executive swapped the showroom floor for Sky News stardom after he was mobbed by Foxes fans as he drove past the team’s King Power Stadium shortly after the team secured the Premier League title on Monday night.

Haughey found himself signing autographs and posing for pictures after fans mistook him for their idol, Leicester and England star Vardy, despite the fact that he was wearing his work tie and blazer at the time.

He told AM: “It was really bizarre. If it’d have been a day earlier I might have expected the attention because I had been driving a 4-Series convertible, a car you might expect to see a footballer driving, but on Monday I was in a 2-Series.

“I think people were just caught up in the moment.”

A video of the moment his car Haughey’s car was mobbed by excited fans – before requiring assistance from police to get clear of the crowds – has been viewed tens of thousands of times on Facebook.

Haughey, who had been to Nandos with friends prior to his drive by the King Power, said: “It has been crazy ever since. Because of how amazing Leicester’s story is I’ve been all over the national ‘papers, on Sky, the lot.

“The DP at Stratstone hasn’t really asked me much about it, he just said ‘as long as it doesn’t interfere with your work, that’s fine'.

“Luckily I was off work on Tuesday anyway, so I’ve been able to really take full advantage, but it was back on the showroom floor again the following day.”

Haughey was carrying out a new car handover when AM called yesterday. His sales bonus likely to be some way off that of star striker Vardy who is set to claim a £20,000-a-week pay rise after his goal scoring exploits in Leicester City’s historic season.