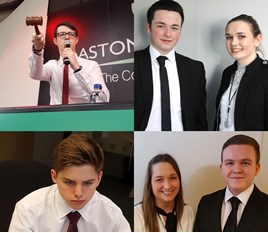 Aston Barclay has added another apprentice to its operation as part of its bid to bring new talent into the remarketing industry.

Liam Draper has recently joined the accounts and finance team at Aston Barclay’s main Chelmsford site, where he’ll learn a wide variety of accountancy and financial skills, working towards his Association of Accounting Technicians (AAT) qualification, whilst gaining vital insight into the remarketing sector.

Aston Barclay has a history of recruiting apprentices to various roles over the last three years, educating them through their tailored in-house apprenticeship, national qualifications and auctioneering courses.

The group’s commercial director, David Scarborough, said: “It is vital for the future of our company and industry that we source and nurture the best talent. The remarketing industry is not one which is widely seen as a career option and often overlooked by many young people, yet through our apprenticeship and training programmes, we have showcased just what an exciting and varied industry it is and that there is real potential to succeed in a range of roles.”

He is now a fully-fledged auctioneer, conducting sales for some of the UK’s leading automotive companies.

Aston Barclay Westbury Assistant Centre Manager, Danny Davis, served in the British Army for over 22 years prior to joining Aston Barclay’s Chelmsford centre in 2011, where he combined his role as an office assistant with his Level 5 Business Management and Leadership NVQ.

Davis received extensive on-the-job training, allowing him to apply his previous military experience to rapidly progress and develop into his current role.

He said: “The depth of Aston Barclay’s apprenticeship and training schemes allows for a fully-immersive introduction into the automotive industry.

“The variety of roles and skills that you can develop, both during off and on-job training, is unrivalled.”