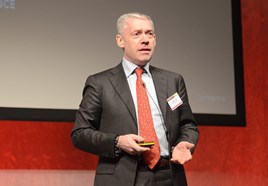 Former Ford, Maserati and Mazda executive Dr Martin Leach has died at the age of 59 after a short illness.

Leach, who started karting at the age of 11 and later became a professional racer, was the co-founder of the NextEV electric car company which had been campaigning with a race team in the Formula E Championship.

But he had also held senior positions at a number of manufacturers and had appeared as a speaker at AM events, most recently the AM Aftersales Conference in April 2014.

Leach was a Ford Motor Company employee from 1979 to 2003, during which time he held a number of senior positions, ending with a spell as president of Ford Europe.

His time at Ford also saw him assume a role as director of Global R&D, managing director and member of the board of the Mazda Motor Company.

Leach was later chief executive officer of Maserati and held posts at LDV and within his own consultancy business, Magma International.

He said: "With the deepest grief, I have to announce that we have lost a great friend, a leader and a founding member and co-president of NextEV, Dr Martin Leach, who left us today after fighting illness over the past few months.

"I came to know Martin in October 2014. I was impressed by his achievements in the industry, and I was deeply touched by his passion in sharing my vision of creating a totally new experience for automobile users.

"Since then, Martin had participated in every step of the NextEV journey.

"In the early days, Martin supported me in creating an excellent leadership team, shaping the company's value and defining our products, which set the foundation of NextEV.

"Martin continued to lead our performance programmes and, under his leadership, NextEV achieved the inaugural drivers' championship title in the FIA Formula E Championship and our supercar will be seen by the world soon.

"Martin is a true warrior and lived to the highest standard. Even during his last minutes, he was still caring about the progress of NextEV.

"I am honoured to have had Martin as a partner. His loss is a great loss to all of us, his legacy will stay forever with NextEV.

"His dedication and his vision will continue to inspire our people to create our history."