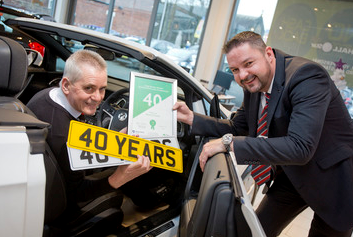 Bristol Street Motors Chesterfield Vauxhall has acknowledged the long service of employee, Kenny Cryans, who has been with the dealership for 40 years.

Cryans started his career as a parts adviser at the Chatsworth Road dealership in 1970 aged 16. At the time, the dealership was known as Peter Blake’s Vauxhall, but was subsequently purchased and became Bristol Street Motors.

To mark the milestone, he was presented with a long service award and gifts to mark the occasion.

Neil Atkinson, parts and accessories manager at Bristol Street Motors  Vauxhall Chesterfield, part of Vertu Motors, said: “Kenny is a well-respected member of the team with a huge amount of experience behind him. He has turned his hand to most roles in the parts department over the years. Everyone, but especially new starters, go straight to him with any questions. He’s a safe and steady pair of hands and an integral part of our team.”

Cryans said: “I’ve thoroughly enjoyed my 40 years at the dealership. I’m not planning on retiring for a few years yet and hope to be with the dealership until then. Having been here since I was 16, I’ve known many of my colleagues for years and come to think of many of them as family.”