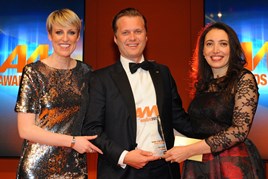 This dealer group tries to do things differently, which is why the judging panel has awarded it the ultimate accolade of AM’s Retailer of the Year.

After 10 years’ trading, Peter Vardy is still a relatively young business, with a wealth of young talent – the average age of its workers is mid-30s.

Employees they are not, because to mark its 10th anniversary the company issued £5 million of share options to its workforce and made them partners in the business. The aim was to create a sense of ownership and to show those partners that everyone’s ideas are worth listening to and that everyone has a role in driving the group forward.

The entrepreneurial and respectful culture is more important than the financials. This is on the basis that if the business looks after its people, its customers, its local communities and its manufacturer relationships, and isn’t afraid to try new things such as the Hillington CarStore to remain relevant to 21st century consumers, then the profits will follow. And so they have – the group averaged        £1 million operating profit per dealership in 2015.

Despite winning Retailer of the Year, Peter Vardy won’t rest on its laurels. Chief executive Peter Vardy and his management team have the ambition and drive to build a world class business.

The business has a very flat structure with lots of ambitious people in roles that play to their strengths. Vardy wants it that way – the staff at the dealerships are focused on selling and delighting the customer. All the support functions they need are provided by Vardy Central, based at Queenslie outside Glasgow, which houses teams covering the accounts, marketing, digital, stock management, human resources and customer contact centre.

It has a retail approach and runs the business on a weekly, rather than monthly, basis. Every Monday, the heads of business and heads of department go through a set agenda with key duties and key issues. The result is that if something is wrong it can be often fixed within a week.

Shortlisted (made up of the winners from each retail category)