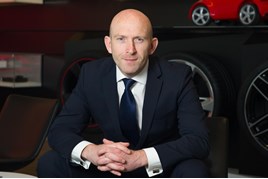 Brennan replaces James Douglas, who has been appointed head of sales for Volkswagen Commercial Vehicles.

Before taking up his most recent position within Audi Fleet Sales Brennan held a variety of roles in the finance and leasing sector, and during ten years with Volkswagen Financial Services became its key interface with Audi UK as general manager, Audi Finance.

A statement issued by Audi said that Brennan forged relationships with fleet managers and key influencers during his tenure at Audi Finance.

James Douglas leaves the brand in the number one position in the premium sector for true fleet sales, the statement added.

Brennan said: “We don’t find ourselves in this fortunate position by accident. It’s the result of incredibly hard work by everyone in the fleet sales team, but also of outstanding leadership by James for which we are all very grateful.

“I’m greatly looking forward to picking up the baton he carried so expertly and pushing us to even greater success in the years to come.”

Brennan will report in to head of Audi Sales Operations, Peter Brookes. Brookes said: “I would like to take the opportunity to congratulate Tom on his appointment.

“He has been an integral member of the Sales Operations Team, playing a key role in supporting the brand’s dominance in true fleet. He will be a fantastic addition to the leadership team.”