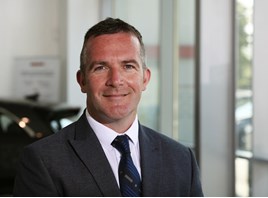 Ward (pictured) joins the company from his role as national sales manager for Jaguar Financial Services and brings with him more than 20 years’ experience in finance.

Hendy’s commercial director, Mark Busby, said: “Having a strong team is key to the success of Hendy whether that is in the dealerships or working at group level and I have no doubt that Tim will play an important role in our future.

“His background in finance and his work at Jaguar Financial Services give Tim valuable experience to help us maximise performance in all areas of the business.”

Ward joins Hendy just 12 months after the takeover of Lifestyle Group and following the announcement of plans for upgraded facilities throughout the group.

He said: “I have dealt with the group since I joined the industry in 1997 and have always admired the way in which it has grown, looks after staff and has a total commitment to customer satisfaction.

“I have watched the group expand and go from strength to strength so I was delighted to be offered this role and look forward to being involved in the future of Hendy.”

Married with two children, Tim lives in Southampton and is part of a football-loving family. He and his daughter are keen Everton fans while his wife and son are Saints supporters.