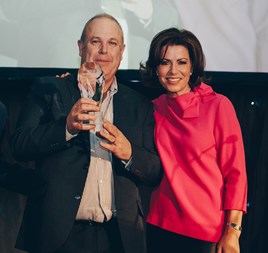 Sales and support staff at south coast based Hendy Group have been honoured for their contribution to a record year at the company’s annual sales awards.

Paul Hendy, Hendy chief executive, paid tribute to all the award winners at the event which was hosted by TV presenter Natasha Kaplinsky.

“It’s a great night for us to come together and these awards recognise the high quality of staff we have working throughout our operations,’’ he said.

This year the company has experienced growth with the acquisition of the south east based Lifestyle group.

The key Hall of Fame award was presented to Malcolm Eales (pictured), a used car specialist who joined the company in 1995 as a car sales executive and became the company’s top performing salesman. He now works for the company as a sales manager in the company’s largest volume used car dealership, in Eastleigh.

There were also awards for the staff at Gatwick Ford which was named Team of the Year, Bendan Young as Sales Manager of the Year for his work at the Eastleigh FordStore and Matt Bennett from the Exeter Car Store who was named Newcomer 2016.