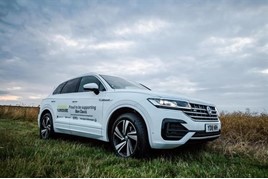 Sytner's Volkswagen Harrogate dealership has provided an all-new Touareg to supported runner Ben Davis as he attempts to complete a gruelling 450-mile lap of Yorkshire in a bid to raise funds for male suicide charity CALM.

Yorkshire-based fundraiser Davis set off from Scarborough on Wednesday 1 and is following a route that will take him through Cleveland Way, Yorkshire Dales, Humber Bridge and Spurn Point, before returning to Scarborough.

Davis is close to reaching his target of raising £15,000 for the Campaign Against Living Miserably (CALM), which is a charity dedicated to preventing male suicide.

Just 48 hours before he was due to begin his challenge he was told his support vehicle wouldn’t be available.

Kevin Howe, head of business at Harrogate Volkswagen stepped in, preparing an all-new Volkswagen Touareg to carry Davis’ supplies and recording the adventure.

Davis said: “I’m really hoping that it will encourage more men to talk about their mental health with friends and family. Let’s all look out for each other.”

During the 450-mile trip Davis is climbing a total of 41,000 ft – a height greater than the summit of Mount Everest.

He is carrying his camping equipment on his back, as well as a GPS device so his progress can be tracked online.