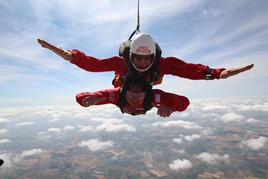 Brindley Honda sales executive Tony Chew took a leap of faith with the Red Devils as part of a fund-raising "thank you" to air medics from West Midlands Air Ambulance.

Chew (pictured) completed the skydive on August 25 in Nottingham in an effort to thank the emergency service after his parents-in-law were involved in a serious road traffic accident which resulted in his father-in-law being air-lifted to Stoke Hospital.

Fortunately, his injuries weren’t life-threatening and he made a full recovery.

Chew, who raised £1,000 with his high-flying fund-raiser, said: “I’ve always been a big supporter of the West Midlands Air Ambulance but never imagined one of my family members would need to use the service.

"After my father-in-law’s recovery I was determined to give something back and say thank you.”

Chew has worked at Brindley Honda, in West Bromwich, for 23 years and said that he was grateful for the support his colleagues showed him ahead of his leap of faith.

“They have been extremely generous in helping raise money for the West Midlands Air Ambulance," he said.

“This was an extremely challenging task, however, the adrenaline rush was fantastic and being able to raise money for such a deserving cause made it worthwhile.”