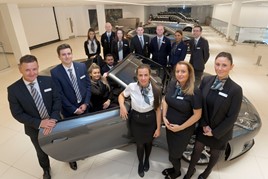 Vertu Motors’ has highlighted the jobs created from a “pool of local talent” as a result of the opening of its new £10 million Farnell Jaguar Land Rover Bolton dealership.

In total, the new facility has created 23 new jobs in the area and James Boyd, the facility’s head of business, is keen to highlight the impact that has made on the local community.

Boyd said: “The £10m that our parent company, Vertu Motors, invested in the new dealership has certainly paid off and it is an integral part of the Bolton local economy.

“The Group demonstrated its confidence in the town with this investment, which led to the creation of significant jobs, and it has allowed us to recruit from a pool of local talent.

“We have bolstered our existing team, with people across different departments in the business, and we are very proud of that.”

Apprentice service advisor, Hanson, is among the beneficiaries of the new dealership facility’s opening.

He receives external training from Land Rover, while also learning on the job, and when he finishes his three-year apprenticeship, he will continue to work in the service department at the site, a statement from the business revealed.

Hanson said: “It is a very exciting time to join Farnell Jaguar Land Rover Bolton. The site is very impressive, and it is a great place to start my career in the motor retail industry.

“I have enjoyed getting to know the team and look forward to completing my apprenticeship with a well-respected business in a thriving town.”