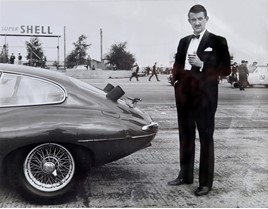 Former Sturgess Motor Group chairman Robin Sturgess died peacefully at his home in Rutland more than 60 years after being bitten by a motor racing bug that would help put him on the fast lane to a career in car retail.

Robin, who served as third generation chairman of the Leicester-based retail group, passed away on March 26 at the age of 85 surrounded by his children Chris, Polly and Barney and leaves seven grandchildren.

Born in 1933, Robin and spent his early life in Leicestershire – first in Hoby, and latterly Ashby Folville – with his parents and sister, Gillian, and was educated at Stoneygate School in Leicester before moving on to King’s School Canterbury.

He started his working life with a technical apprenticeship at the Rover Company’s Tyseley factory in 1951, and following demob from National Service in 1957, where he served with the Cavalry regiment the 3rd Carbonniers he joined the family business as a Service Receptionist.

The motor racing bug bit hard in 1958 though, starting with a Jaguar XK120 and progressing to a C-Type two years later.

It was during his time at the wheel of various Jaguar E-Types that Robin became synonymous.

These cars wore the distinctive registration number 2 BBC, serving their weekday roles as company demonstrators and then acquitting themselves well on the circuits of Silverstone, Mallory Park and Snetterton at the weekends.

The 1962 season was undoubtedly his most successful with 12 1st places out of 22 starts and no retirements.

Comments in a family written by the Sturgess family revealed: “Frankly, he could not afford to retire as he had to drive the car home.”

Following the birth of his first son, Christopher, Robin gradually curtailed his racing activities with a final flourish in a Lotus 22.

He then threw all his energy into the family business progressing through sales director, managing director and, finally, chairman in 1982.

In addition to the family business Robin also turned his attentions to the motor trade “aftermarket” and established Robin Sturgess Accessories during the 1960s.

From a modest shop in Leicester, operated with his old friend Chris Mitchell, RSA flourished during the 1960’s and 70’s, representing brands like Cibie, Motolita and Les Leston and continued to grow until it was eventually sold in the early 1980s.

Robin continued an active business life and saw the Sturgess Motor Group acquire a number of further franchises, all based in the City of Leicester.

Throughout his busy working life, he was a member of the City of Leicester Rotary Club, supporting the work of the organization for over 40 years.

Robin finally retired from the family business in 2008 when his sons Chris and Barney became chairman and managing director.

Robin’s other life-long passion was field sports which started when he acquired his first horse at the age of 14 whilst still at school in Canterbury.

His early hunting life was spent with the Quorn Hunt however it was with the Cottesmore which he was devoted and served for many years on its committee and as Chairman on two occasions.

The Sturgess family said: “His post-retirement life was never dull, spending time with family and friends, involvement in many charities, the active support of the Cottesmore Hunt (even after he was forced, through repeated injury to stop riding), exploring different parts of the world or simply relaxing in what he described as ‘his little corner of paradise’ on the island of Menorca.”