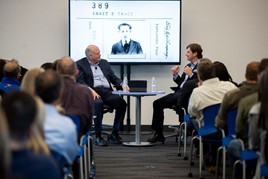 Ford’s chief operating officer Jim Farley will take over from Jim Hackett as the US car manufacturing giant’s president and chief executive (CEO) on October 1.

The move, a result of Hackett’s decision to retire, was announced at a press conference this lunch time (August 4).

Ford chairman, Bill Ford, said that Farley will work closely with Hackett on the transition over the next two months as part of a “seamless CEO transition” which underscores the strength of its leadership team, succession planning, and company progress over the past three years.

“I am very grateful to Jim Hackett for all he has done to modernize Ford and prepare us to compete and win in the future,” said Bill Ford.

“We now have compelling plans for electric and autonomous vehicles, as well as full vehicle connectivity. And we are becoming much more nimble, which was apparent when we quickly mobilized to make life-saving equipment at the outset of the pandemic.”

Bill Ford said that he had seen Farley develop into “a transformational leader with the determination and foresight to help Ford thrive into the future” in welcoming him to his new role.

Farley joined Ford in 2007 as global head of marketing and sales and went on to lead Lincoln, Ford South America, Ford of Europe and all Ford global markets in successive roles.

In April 2019, he was chosen to lead Ford’s New Businesses, Technology & Strategy team, helping the company determine how to capitalize on powerful forces reshaping the industry – such as software platforms, connectivity, AI, automation and new forms of propulsion.

He was named chief operating officer in February of this year.

In a statement issued by the OEM, Hackett – who will remain with the OEM as a special advisor until March of 2021 – said: “My goal when I took on the CEO role was to prepare Ford to win in the future.

“The hardest thing for a proud, long-lived company to do is change to meet the challenges of the world it’s entering rather than the world it has known.

“I’m very proud of how far we have come in creating a modern Ford and I am very optimistic about the future.”

Farley said: “I love Ford and I am honored by the opportunity to serve and create value for Ford’s employees, customers, dealers, communities and all of our stakeholders.

“Jim Hackett has laid the foundation for a really vibrant future and we have made tremendous progress in the past three years.

“I am so excited to work together with the whole Ford team to realize the full potential of this great company in a new era.”

Ford is currently in the process of cutting its 400-site UK franchised retail network by almost half, a story reported by AM back in February this year.

As its franchised partners close sites, however, International Trade Secretary Liz Truss revealed last month that the Ford had taken a £650 million loan to boost its investment into the development of electrification and smart mobility solutions in the UK – with the help of a £500m Government loan guarantee.

Truss said: “This deal firmly puts the UK at the heart of Ford’s plans to grow its export business, reduce emissions and support skilled manufacturing jobs.

“A thriving automotive industry is vital to the success of the UK economy."

Ford dealer network shake-up may impact industry as a whole

Ford dealer network shake-up may impact industry as a whole