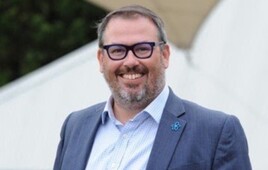 Tributes have been paid to Cox Automotive commercial vehicle customer insight director James Davis after he died at the weekend.

A statement issued by the automotive services and remarketing provider said that that Davis, who was known for his passion for commercial vehicles and classic vehicles, will be “greatly missed by family, friends, team members and customers”.

But friends and colleagues also responded to Cox’s official tribute with their own recollections.

Cox Automotive International president, Martin Forbes, said: “His energy, his enthusiasm, his excitement, his passion, his smile, and how he shared the love...

Cap HPI head of valuations, Derren Martin, described Davis as “an absolute top guy”, meanwhile, as friend and former colleague Perran Moon said the industry would be “worse off” without him.

Autoswot founder Moon said: “James, Craig Mailey and I all joined Manheim at the same time in 2004.

“I was lucky enough to call him my friend for 17 years. He has one of, if not the nicest guy I’ve met in UK auto. The industry is a little bit worse off today, for his passing. RIP my friend x”

Davis started his career with Central Motor Auctions in the early 1990s, before moving to National Car Auctions in 1994 as commercial vehicle administrator.

He was appointed asset manager at Lex Transfleet in 1999, based in Coventry, responsible for remarketing of owned and fleet managed assets.

After a short spell out of the industry with Royal Bank of Scotland, Davis returned to Manheim Auctions in 2004 as regional commercial vehicle manager for the South before being promoted to director of commercial vehicles in 2010 with responsibility for Manheim UK's CV strategy.

He was appointed customer insight director for CV for Manheim parent Cox Automotive in 2018.

Outside his working life, Davis was also well-known for his enthusiasm for all things automotive, in particular his beloved 1959 MGA sportscar, which he used to raise significant sums for the Alzheimer’s Society.

Davis was a founder member of the Association of Heritage Engineers (AoHE).

A statement issued by the AoHE said: “It won't be the same without his immense energy, affection and enthusiasm - going to miss you fella, really quite a lot.”