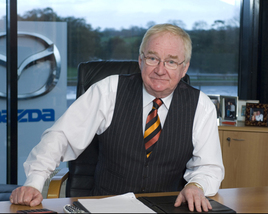 Saltmarine Cars was closed to customers over the weekend to allow employees time to celebrate the life of the car retail group’s founder Ivan Neil Salt, following his sudden death.

Salt, who founded Saltmarine Cars in Dungannon back in 1969, died following a sudden illness, aged 75, on April 27.

A statement published by the retail group on social media hailed him for growing a business “that would become known for the very highest standards of customer care”.

It added: “Over the years he formed personal friendships with so many customers and enjoyed seeing the same faces return time and again.

“He will be missed by all.”

A funeral service took place on Saturday at Tartaraghan Parish Church, in Craigavon, followed by a private committal.

The business’s Ford, Hyundai and Mazda dealerships closed their doors for three days as a mark of respect to the father-of-four and beloved grandfather.

Among hundreds of online tributes paid to Salt since his death, former friends and colleagues described the businessman as a “brilliant employer” and a “true gentleman”.

Ford retailer Brown & Day and John Mulholland Motor Group were among the car retailers to pay their respects with tributes.

Friend Lyn McCrea wrote: “We were privileged to call Neill a friend during our twenty years plus of doing business with Saltmarine. Just recently when in the showroom I had a long chat with him. What a legacy he has left behind.”

Paul Cooke, meanwhile, said he would always remember Salt as “a hard working businessman who would always had time for “a chat and a yarn”.