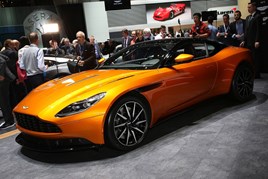 Aston Martin and Total have signed a global partnership agreement, which extends throughout 2016 and 2017, providing its products to the luxury British marque and its official motorsport outfit.

David King, vice president and chief of special operations at Aston Martin, said: “Aston Martin is a global luxury brand and it is important that it continues to work with only the best from around the world.

“We recognise Total as a leading player in the automotive fuel and lubricant arena and we very much look forward to working with them, to achieve success both on and off the track”

All three V8 Vantage GTE cars entered by Aston Martin Racing in this year’s WEC will race with Total lubricants and, for the first time outside of Formula 1, Total will provide a mobile laboratory and technical support with a dedicated engineer present at each WEC race event.

Last month Kia extended its relationship with Total for a further five years across its service network of more than 5,500 dealers in around 180 countries.