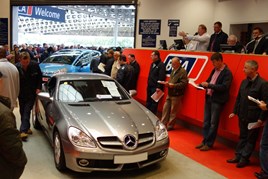 The average value of an ex-fleet car sold at BCA in November was £70 lower than the previous month, while part-exchanges dropped £87.

BCA Pulse shows average values for fleet/lease and part-exchange cars both fell back slightly from the record levels seen in October, but both remained well ahead year-on-year, with the fleet & lease value being the second highest on record.

Average values for dealer part-exchange cars also declined from the record levels seen in October down by £87 (1.9%) to £4,314 over the month.

Issues over condition and presentation remain.

Simon Henstock, BCA’s UK operations director explained: “While average values remain exceptionally strong, this reflects the development of a two-tier market, where the best vehicles sell quickly for often exceptional values, while the less attractive or over-valued cars struggle to attract the same sort of attention.”

He added: “It is important that the less desirable cars are properly appraised and valued in line with market sentiment, otherwise there is a risk they will remain unsold, putting pressure on conversion rates.”