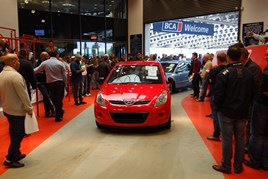 Over 400 vehicles were sold as Jardine staged a record-breaking sale in its exclusive remarketing partnership with BCA.

The sale, at the Bedford auction centre on April 11th, offered 426 cars direct from Jardine dealerships nationwide and entered for sale via the exclusive BCA Dealer Pro service.

Every car was pre-sale prepared and the majority were offered with BCA Assured.

A BCA spokesman said that the event attracted over 200 buyers to BCA Bedford with hundreds more participating via BCA Live Online.

The 405 cars sold represented a record volume for a Jardine sale and equivalent to a 95% conversion that realised just short of 100% of CAP Clean.

“There was confident bidding throughout the event, underlining that the combination of attractive stock and an engaged buyer base generates exceptional results.”

BCA’s major account manager (Dealer Groups), Suzanne Spencer, said: “This was a record-breaking sale event for the BCA and Jardine partnership.  Jardine offered a superb selection of desirable retail quality stock and it proved irresistible to our buyers.”