The UK’s used car market grew by 7.9% in the first half of 2016, to reach the highest number of sales since records began.

According to figures published today by the Society of Motor Manufacturers and Traders (SMMT) 4,181,042 used car transactions were made between January and June – the first time the market has surpassed four million units in the first half of the year since data started being collated in 2001.

The surge in used car sales mirrors the record and sustained levels of growth in the new car market in 2015 and earlier this year.

Motorists in the South East of England were responsible for the highest share of sales (14%), followed by those in the North West (10.2%) and the West Midlands (9.8%).

April was the most popular time to buy a used car, when used car stock is particularly strong following March’s plate change, with more than three quarters of a million (760,308) vehicles purchased in this month.

The most sought after age for a used car was between one- and three-years-old, with these making up the biggest proportion of overall sales.

Reflecting the trend towards more compact driving seen in the new car sector, superminis were the most sought after body type, representing one in three transactions (33.9%), with small family cars in second place, accounting for more than a quarter (27.2%). 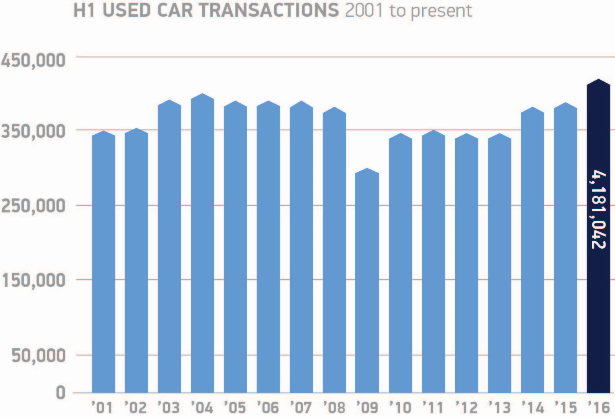 Silver was the most popular colour, with almost half a million cars changing hands so far this year, followed by black, chosen by one in 10 used buyers, blue and grey.

Bolder colours were in also in demand, with yellow and gold, which had fallen in popularity in the new market, now featuring once again  in the used car  top 10.

The Ford Fiesta was the UK’s favourite used car, with nearly 60,000 sold so far this year.

This was true of buyers in Cardiff, while Edinburgh’s best-selling used car was the Vauxhall Corsa, Londoners preferred the Ford Focus and car buyers in Belfast were more likely to opt for the Volkswagen Golf.

Mike Hawes, SMMT chief executive, said, “The UK’s used car market is at its strongest ever, and that’s great news for buyers spoilt for choice with the latest advanced vehicle technology and attractive financing options.3

“The growth in the used car market has reflected the record demand for new cars in recent years, but future growth in high cost purchases will depend on stable consumer and business confidence.”

Chris Bosworth, director of strategy at Close Brothers Motor Finance, said: “Today’s figures continue to show the current strength of the used car sector, which mirrors the growth of the new vehicles market we saw toward the end of 2015 and earlier this year. We are beginning to see the supply of used vehicles starting to catch up with demand, which is leading to a fall in prices for used vehicles whilst exchange rate movements mean manufactures are less inclined to subsidise finance on new vehicles.

"This is starting to result in consumers now opting for well-priced ‘nearly-new’ stock’ between one-three years old.”

“According to figures from the FLA, the used car finance market in the UK already grew by 15% year on year during the first quarter of 2016, and our own data suggests that July was a strong month for used car dealers.

"With so many well priced ‘nearly-new’ cars on the market, consumers have never had it better when it comes to the types of cars and financing options available to them. We expect the growth in the used car sector will continue for the remainder of the year, buoyed by the diverse financing options, such as PCP, and the increase consumer confidence in the market.”

> SMMT used vehicle transaction data will be published on a quarterly basis from the second half of 2016.

AM Poll
Do you expect battery electric vehicles to still require an annual service? Please leave a comment.
Vote
View all
335