One year on consumers have largely forgotten about the Volkswagen emissions scandal – but it has led to ongoing concern about the popularity of diesel cars.

From a value perspective, Glass’s say, the initial "knee jerk" reaction experienced in September 2015 that led to differences of up to four percentage points on the Glass used car index for Golf diesel vehicles, and larger for other group brands, has dissipated.

The negative impact was “negligible”.

The graphs below show VW Group, VW brand and all other brands' average used vales over time, where 100 in the x-axis is the value in July 2015 . The vertical line in September marks the emission scandal breaking in the media. 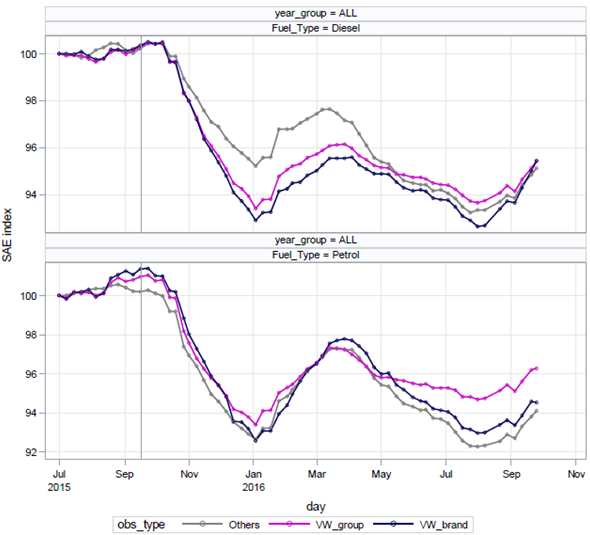 “The financial cost to Volkswagen as a group has been significant and is likely to increase further, but the fact remains that when it came to it, the retail consumer just did not mind about the impact on the environment as much as they cared about their back pockets,” said Rupert Pontin, Glass’s director of valuations.

“The quality and appeal of the Volkswagen brand cars also had a significant part to play in putting the situation into the past.”

However, he said, the emissions scandal raised the question as to whether diesel should be a ‘fuel for the future’.

The damage to the environment and human health were the subject of reports and reviews.

The early support given to diesel by previous UK governments is reflected in the chart below depicting the growth of diesel registrations in recent years.

Since mid-2014 diesel sales growth has begun to slow and where the UK car industry is still experiencing market growth overall there is evidence of a lower increase in diesel sales.

It is petrol and alternative fuel vehicles that are enjoying greater traction, particularly the latter, Pontin said.

Data in the following charts starts to demonstrate that, although there are plenty of new diesel cars coming to the market, the ability to make money from them in the used car market is “somewhat more challenging than many expect”.

Taken from a comparison between trade and retail data the charts show the gross margin for petrol and diesel cars on a national basis.

“It is clear that gross margin for petrol cars has been running at a much higher level that than of diesel powered cars for over a year.

“Indeed the closest this has been is 8% in the last 12 months.

“Looking at the data in more depth reveals some very interesting differences on a regional basis, with two key regions of the UK performing in a uniquely similar way despite having a significantly different financial demographic that might have implied a very different level of margin opportunity.”

One of the other 'vital' comparisons to make is around the time it takes to sell each fuel type - petrol models take longer to sell.

A further filter is age of vehicle which, when queried, demonstrates a far lower margin percentage on later plate cars although the bias is still in favour of petrol powered cars.

“With such low volumes of alternative fuel vehicles in the market it is difficult to draw consistent conclusions, although this picture improves as every month passes.

“As it stands today hybrid vehicles show margins in the region of 15% to 20%, notably lower than petrol powered cars and a short way behind diesel.”

Days to sale are similar to other fuel types, as would be expected.

“But it does raise questions as to why margins would be lower.

“Pure electric vehicle data shows a far greater level of volatility with margins reaching as high as 45% and days to sale running as long as 90.

“These results complement each other and are understandable but will change swiftly as used electric vehicle volume improves.

From the information highlighted, one could draw the conclusion that diesel sales are not only beginning to slow in the new car market, but that selling used diesel powered cars is less profitable.”

“It is important to remember that interpretation of data is different depending on the business model to which it is being applied and by whom, but without the data there is clearly a distinct disadvantage.

“Despite nuances and press speculation diesel powered vehicles will be here for some time to come.

“They are still in demand and still selling reasonably well in both the new and used markets, albeit with regional variations.

“Alternative fuel vehicles are growing in popularity but are still a very small part of the market overall.

“It is worth noting that with the development of battery capability and usable real world ranges now being available on electric vehicles, some have questioned the importance and relevance of hybrid technology.”