The number of warnings flagged against used vehicles checked by Mycarcheck.com has risen year-on-year.

Its report by reveals the write-off, finance and stolen risks for its 20 most-searched makes.

The risks differ from make to make.

New entry in the top 20, motorbike and scooter manufacturer Yamaha, was worst for stolen.

21.65% of all Honda vehicles checked returned a write-off warning, compared to a mycarcheck.com top 20 average of 17.61%.

Head of Mycarcheck.com Roger Powell said: “Buying a used vehicle should be exciting, but the private marketplace especially is fraught with risks.

“We need to get the message out that, for a tiny percentage of the overall purchase cost, you can confirm whether the car or bike you’re looking at is stolen, has been previously written-off or has any finance debt against it.” 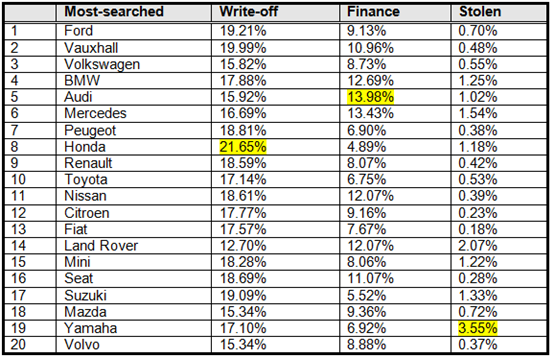