Almost half of respondents to a recent survey by the National Association of Motor Auctions (NAMA) said they expect volumes of vehicles coming into auction to increase over the next month.

The used market has been rocked by supply disruption affecting the supply of new cars, leading to a spike in values and reduced availability of models.

Consumers are increasingly seeking used models as a result of the long lead times currently associated with new cars due to the global semiconductor shortage.

Some new cars are expected to be delayed by up to a year as manufacturers struggle to source the much-needed computer chips.

More than 30% of survey respondents expect auction volumes will reduce, highlighting the uncertainty in the current market. 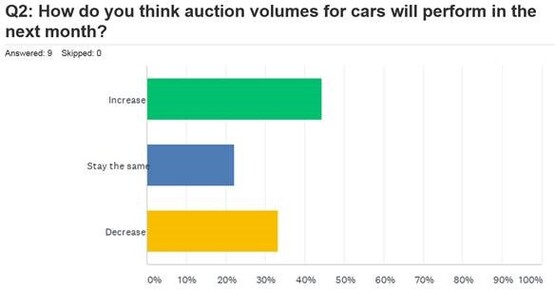 Some auctions are expecting to see volumes increase over the next month as the new plate changes this September generates part exchanges from new vehicles sales. Whether manufacturers will be able to deliver high volumes of new cars remains to be seen.

Either way, there will continue to be strong consumer demand for used vehicles and the need for retailers to stock their forecourts.

More than half (55%) of respondents are favouring conversion rates to increase over the next month and 45% expecting them to remain the same.

Furthermore, all respondents of the survey are expecting an increase in petrol values and 75% in diesel values over the next month.