Nothard: Where do you go from a record year?

Where do you go from a record year? It appears to be a key concern for the industry and an issue that encompasses everything from used values to dealer margins.

A strong start to the year may have gone some way to allaying fears. New registrations are up and demand for used vehicles appears to be supporting values, despite larger volumes in the market.

We’ve already seen buyers returning to the forecourt and strong auction activity across the UK. This has led to values remaining stable through the first part of the year.

Dealers reported that buyers returned to the market at the start of the year with 69% of the respondents saying that physical footfall improved compared to the previous month.

On-line activity was even more encouraging, with 75% of dealers we surveyed reporting improved levels of activity. There is a clear trend that online activity is increasing year-on-year compared to showroom visits.

Even though the market is strong, margins remain a concern for many retailers. Many businesses are accepting tighter margins for the sake of volume and increasing stock turn. In this environment it is important to buy with some care. Buying the right vehicles for the local market, at the right price and in the right condition will improve stock turn and build in flexibility. 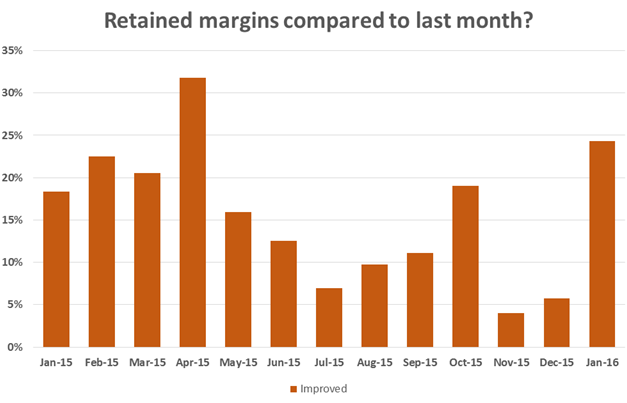 When appraising a vehicle, it is important to be clear about the difference between cap clean, average and below. A clean vehicle is ready to retail and should be priced higher than an average vehicle, which is only worth an average price.

Dealers must be vigilant about the provenance of a vehicle in today’s market. From clocking to flood damaged vehicles, careful checks underpin healthy profit margins.

Despite record new registrations in 2015, it proved a ‘roller coaster’ year for retained margins. One in five dealers in our survey saw an improvement in margins through the start of the year. Equally, we saw a near 20 per cent fall in those dealers who had seen a fall in margin.

Pre-registration is now a part of life with most dealers managing the issue tactically, and keeping a weather eye on the balance between nearly new and used vehicles. The continued and rising popularity of PCP and leasing means the nearly new sector will remain volatile.

It is clear that dealers are approaching the nearly new market with caution, with two thirds of those surveyed reporting there are too many in the market.

More than ever, dealers understand the impact of digital media on their business. With 90 per cent of buyers starting their purchase online and increasing numbers using portals to inform their target pricing, it is important to match stock profile and pricing against the competition.

It is clear that the world of motoring retailing is becoming ever more complex. Successful retailers must be experts in digital marketing, buying and selling, finance, and the list goes on. But in this complex world the industry is thriving.

Some dealers have reported the best January since 2008 and best February on record. Investment is pouring into the industry from retailing to the automotive supply chain.

Now, more than ever, it is important to manage the stock profile with a keen eye on the local market. Having the right mix of vehicles, at the right price, will keep the forecourt busy.