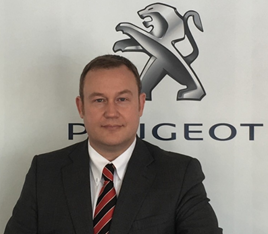 Jason Kenny is getting more than 50 messages a day praising him for his Rio Olympic victory.

Only this Jason Kenny (pictured) works at a Perry Motor Sales dealership.

Social media users have been getting him mixed up with the Olympic gold-medal winning cyclist, who, like Perrys’ Kenny, is from Farnworth in Greater Manchester. But fortunately the lesser known one, who’s also into cycling, says it’s an "absolute pleasure" to get the Olympian’s tweets.

He has changed his Twitter biography to end the confusion and points users in the right direction towards his more famous namesake.

He said: “It’s happened for years and first started when he was at the Beijing games, then obviously London and now Rio. I usually just re-tweet them or sometimes I reply and say thank you but I am not in Rio. I find it funny.”

He is general manager for Perrys Bolton Peugeot in Bridgeman Street – near to the Jason Kenny Centre in Bolton One.

“We had an open day at Perrys Bolton Peugeot and we put on the invites that Jason Kenny would be on site to meet people. People were turning up asking could they meet Jason Kenny, so they were a bit disappointed when I stepped out; they must have thought that I had really let myself go since the Olympics.”

He said of the Olympian: “If he doesn’t become Sir Jason Kenny, then there’s something wrong.”

AM Poll
Are you confident your teams are booking back most deferred 'amber' work from services? Please leave a comment.
Vote
View all
394