AM opinion: Franchised dealers need a strong voice with politicians

It’s just over a year since the ‘dieselgate’ scandal involving Volkswagen Group made international headlines. Very quickly, Paul Willis, the boss of Volkswagen Group UK, and Mike Hawes, the chief executive of the Society of Motor Manufacturers and Traders, were invited to appear before Parliament’s transport select committee to explain how it would be fixed.

Before the EU referendum, Nissan boss Carlos Ghosn had suggested the carmaker would reconsider investment in its Sunderland plant if the electorate voted for Brexit. After the result, reports emerged from the Paris Motor Show of Ghosn wanting compensation should Nissan’s exports be affected by tariffs. That was promptly followed by the Prime Minister, Theresa May, granting Ghosn a private meeting in mid-October.

Carmakers, it seems, are very much on the radar of senior figures in Parliament. But are franchised dealers?

Reporting after Ghosn’s meeting with the PM, the BBC pointed out that Nissan Sunderland employs 6,700 people. However, the dealer groups in the AM100 (not even the entirety of the UK’s franchised networks) employ 112,099 people between them, almost 17 times as many as Nissan. These people rely on the goodwill, and integrity, of the manufacturers to not jeopardise the profitability of their employers. As they occasionally have a tendency to do.

So if fears of Brexit do cause a slowdown in the UK’s economy next year, as many expect, shouldn’t franchised dealers also be able to bend the ears of the cabinet?

Where’s that hotline to Number 10?

AM - Automotive Management - November is out now 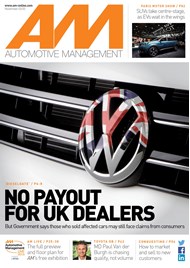 The November issue of AM - Automotive Management – magazine is out now.

◙ Why UK dealers may still face fall-out from the Volkswagen dieselgate scandal.

◙ How Toyota is rebalancing its operations in Britain with new models and better service.

◙ PLUS a full preview of the Automotive Management Live event.