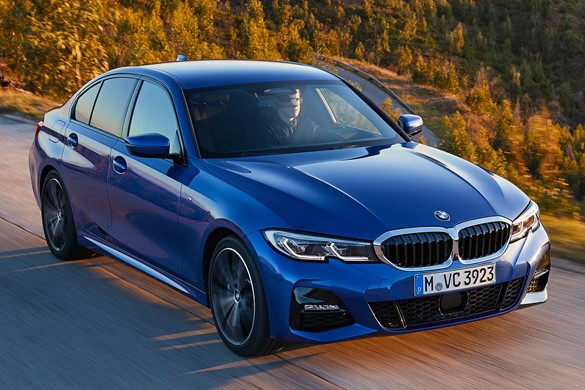 Described by BMW as the heart and soul of its range, the carmaker expects its new 3 Series to continue the success of its predecessor.

BMW’s best-selling model has long been considered as the aspirational vehicle for many company car drivers, with its badge appeal, traditionally sporty characteristics and efficient engines proving to be a winning formula in the corporate market.

It is also a significant car for BMW in the retail sector – the brand expects retail customers to account for 40% of 26,000 registrations in its first full year on sale.

At its launch in March, it will be available in three powertrain variants – a 190PS 320d diesel in rear-wheel drive or xDrive all-wheel drive versions, and a 258PS 330i petrol.

Of these later arrivals, the PHEV is expected to be the biggest seller – it will be able to travel up to 37 miles on electric power alone, 50% more than its predecessor – while average combined fuel economy will be 138mpg, with CO2 emissions of 39g/km.

BMW expects this powertrain to account for 30% of registrations, with more than 90% of those going to corporate customers.

The biggest seller, however, will be the two-wheel drive 320d, which will account for 50% of registrations.

Under the Euro 6d-TEMP exhaust standard, it has CO2 emissions of 110g/km to 122g/km depending on transmission and trim level. Its official combined fuel economy ranges from 67.3mpg to 60.1mpg.

We drove the 320d with the eight-speed Steptronic automatic transmission, and the driving experience lived up to the range’s sporting image. The 2.0-litre diesel engine produced plenty of power, delivered smoothly throughout the rev range.

The ride was typical of BMW – firm and controlled enough to give a sporty feel, but also delivering a decent level of comfort. The steering was also nicely weighted and precise, making the car feel agile.

The 3 Series is more spacious than its predecessor, offering more shoulder and elbow room in the front, while legroom in the back is also greater. All occupants benefit from increased headroom.

The quality of build and materials is impressive, while the refreshed interior design is comparable to the best-in-class.

Among the highlights is the new digital instrument cluster. Instead of using round dials as before, the speed and engine revs are shown on arced graphics that follow the outside edge of the display, creating space in the centre of the cluster to display information such as navigation guidance.

This is complemented by a large touchscreen at the top of the centre console, from where the infotainment system can be controlled. It all feels fresh and intuitive.

Sport adds a range of exterior upgrades, such as 18-inch alloy wheels, as well as heated leather sports seats and high-gloss back interior trim highlights.

Both these trim levels will account for 15% of sales, with the range-topping M Sport taking the remaining 70%, further emphasising the car’s sporty appeal.

BMW has simplified the option structure for the 3 Series, with five main packages and about 10 single options available.

The packages group options with similar functionality or customer benefit, and BMW said this will ease the ordering process while still allowing for personalisation.

How important is the new 3 Series for BMW UK and its dealers?

We launched the first BMW 3 Series in 1975.  When you are dealing with such an iconic car, it’s vital that any new version is true to its origins. That’s why so much focus has been placed on the driving characteristics of this seventh-generation car. But just as much focus has gone in to the technology and innovations, where customer expectations are growing considerably.

What are you doing to support your dealers with the launch of the car?

We have a major launch planned for March 9, alongside the brand new Z4. This will attract customers at a peak time of the year for retailers. We have also simplified the model structure and option and package programmes – from six packages and 45 options to five packs and closer to 10 options. This should help customers make their choice of specification confidently.

How many do you expect to sell in the first full year in fleet and retail?

How do you expect the sales mix (trims, powertrains) of this generation to differ?

We have ensured that from the SE trim upwards, standard specification is very strong, as you would expect of a premium car. However, our customer appetite for M Sport has grown consistently for many years now and shows no sign of slowing down. This model will be at least 70% of the 3 Series volume. Diesel continues to outsell petrol by a significant margin on 3 Series, so although petrol has seen a resurgence in popularity, we expect diesel to continue to sell extremely well.

What new opportunities does the car present to your dealers? Why do you expect the 3 Series to conquest customers in fleet and retail?

We believe the new 3 Series is such a compelling mix of outstanding driving dynamics and class-leading technology that customers who may have purchased alternative cars in recent years will be compelled to come and try it. Retailers will have a fantastic opportunity to revisit their customer base and engage with potential customers. The high level of standard specification and extremely competitive CO2 position will undoubtedly be a significant draw for fleet customers.