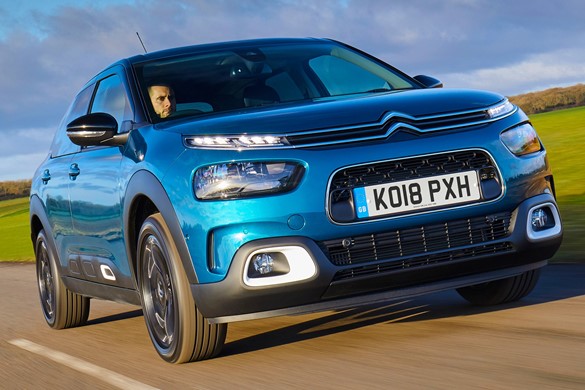 Although Citroën will begin and end 2018 with two all-new SUV models, their forebear in the manufacturer’s new breed of crossovers has lost some of its distinctive character in its latest guise.

The March arrival of the updated C4 Cactus followed the January launch of the C3 Aircross – the replacement for the C3 Picasso – and comes several months before the arrival of a new C5 Aircross flagship for the brand.

The manufacturer wants the vehicle to span market sectors, with the Mk2 Cactus attempting to plug a gap left by the departure of the C4 hatchback.

That is a more modest aspiration than many may think. Citroën registered 6,228 C4 Cactuses and 692 C4 hatchbacks during 2017. It expects the new C4 Cactus to yield 7,000 registrations in its first full year on sale.

Design-wise, the Mk1’s divisive Airbumps have been slimmed down and repositioned to the base of each flank – less conspicuous, but also less effective at stopping door dents. The ski-like sculpted roof rails have gone completely.

A total of 31 exterior colour combinations and five “interior ambiances” prioritise subtler hues, but do deliver a variety of options for potential customers.

From a retailer’s point of view, the cleaner appearance and improved quality on show mean it should appeal to a wider audience.

As the first vehicle to be part of the Citroën Advanced Comfort programme, the new Cactus features 15mm of memory foam padding on what are now extremely comfortable and supportive seats, greater sound-deadening and a new suspension set-up.

Citroën filed 20 patents in the creation of the new suspension, which replaces conventional mechanical bump stops with progressive hydraulic cushions (PHC) for both compression and rebound.

Dealers should be keen to get prospects into a car that sets high standards of comfort and refinement despite starting at £17,265 (Feel Edition Puretech 82 manual).

In an effort to help get potential customers behind the wheel, Citroën will introduce a 24-hour test drive programme.

Less emphasis will be placed on the fact that the starting price of the new C4 Cactus is £3,300 higher than its predecessor, yet the most expensive model in the range, the £20,895 BlueHDi 100 S&S, costs £430 less than the outgoing top spec.

At launch, Citroën’s promotional PCP example is a three-year, 18,000-mile, 4.9% APR offer, resulting in £219 monthly payments for the Puretech 110 Feel Edition when a customer places a £2,000 deposit. This is backed by deposit contributions of £900 from the manufacturer and £1,600 from the dealer.

Three specifications are available – Feel, Feel Edition and Flair – along with three petrol engines and one diesel.

The petrol engines are all 1.2-litre Puretech three-cylinder units that come in 82PS, 110PS or newly introduced 130PS options.

Only the 110 Puretech is available with the option of an automatic gearbox.

We drove the 130PS Puretech with a six-speed manual and the 110PS six-speed automatic gearbox option.

The engine pulls keenly and the new suspension set-up has a marked effect – the ride is smooth and composed.

The uncluttered dashboard features a seven-inch touchscreen infotainment system, which incorporates sat-nav and a reversing camera in Flair trim.

Drivers will be able to connect their smartphone via Apple CarPlay, Mirror Link or Android Auto to access their phone’s apps and navigation functionality.

Among the other standard features of the new Cactus are 60:40 split rear seats (their absence was a bugbear on the original Cactus), rear parking sensors, cruise control and automated emergency braking.

Retailers should be aware that the panoramic sunroof, standard in Flair trim, will not suit those who regularly transport adult passengers in the rear seats. Anyone over 6ft will have their neck cricked by what is a low roof for a vehicle that appears fairly tall.

There have been many improvements to the new Cactus. It is now a class-leader in the comfort stakes and boasts improved interior quality and new technology.

But the limited rear headroom and an inability to fully open the rear windows (they still rely on a rocker mechanism at the rear) remain features that may see it struggle to compete with key rivals in the practicality stakes.

What are the key improvements that were made to the new-generation C4 Cactus as a result of feedback related to the original vehicle?

There have been a handful of tweaks, all designed to make life easier. In the front, there are now one-touch electric windows and we have introduced folding door mirrors and an upgraded sat-nav system. Split rear seats were introduced in a mid-life upgrade of the first generation car.

Central to the new car, though are the 15mm memory foam pads of the Advanced Comfort seats added to the front and rear seats as standard and the added sound insulation to improve refinement.

A new test drive programme will be rolled out with the launch of the new C4 Cactus. Tell us a little more about that

We have done a 24-hour test drive for limited periods in the past, but in this case, it is a programme specific to the Cactus, which will be ongoing. We need to get people into the car to experience the improvements and this can help dealers do that.

There are certain things like ride comfort and increased refinement that you can only tell people so much about. It has to be experienced, really. Cars were in the showrooms at the end of March and full social media promotion of the test-drive programme will start at the end of April.

What are the anticipated registrations and the mix in terms of trim levels and engines?

Most manufacturers seem to deliver a fully specced launch edition vehicle at a premium price. Why is the C4 Cactus Edition cheaper than the rest of the range?

The Edition is only available in conjunction with the Puretech 82 and the reality is that the Puretech 82 engine has been very popular in the existing Cactus, but it will only be available for three to four months from launch due to the changes to Euro emissions testing. This gives people the chance to get into the car at an appealing entry point.