Fiat’s roadster carves out new niche for itself 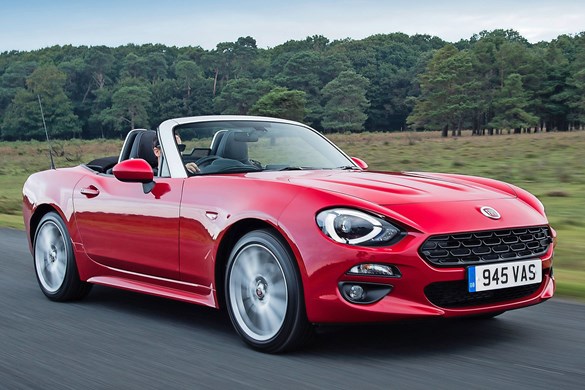 If you’re going to produce a roadster what better way to do it than take the best platform currently on the market and tailor it to your own requirements?”

As a premise for producing a new vehicle that should be guaranteed to compete with the best in the class, Pietro Carminati, Fiat’s UK product manager for the 124 Spider, is in no doubt that the approach taken with the brand’s new flagship sports car looks pretty much perfect.

In any other segment it is inconceivable that a relationship could exist like the one between Mazda and FCA Group, but sharing the cost of development in such a niche sector will have made sense to both parties, the Italian observed while in conversation with AM.

Designs for the MX-5 and 124 Spider were developed by separate teams at the same time and are now built, by Mazda, on the same production line in Hiroshima, Japan.

Fiat has stamped its own mark on the iconic Japanese roadster – 2,952 sales strong by the end of August YTD. There are no shared exterior panels and the turbocharged engines are shipped to Japan from the Italian manufacturer’s Termoli plant.

Bespoke tuning for the suspension and steering also promise to distinguish the 124 Spider from the MX-5.

Early indications are that Fiat will have little problem selling its first foray into the sports car sector since the left-hand-drive-only Barchetta of 1995, with demand for the 1,000 vehicles destined for the UK expected to outstrip supply.

Carminati said: “In March the 124 Spider was unveiled at the Geneva Motor Show and the order books were opened in the UK for the limited-numbers Anniversary Edition, celebrating 50 years since the original 124 Spider.

“By the beginning of August all 124 cars had sold out. When you have people coming to your showroom and placing deposits before they have even had the opportunity to see the car in the metal, we take that as a very encouraging sign.”

Fiat Chrysler Automobiles UK’s new managing director, Ashley Andrew, told AM: “The 124 Spider brings to the network another iconic flagship – like the 500 – which will attract a raft of new ‘considerers’ to the brand. The reaction so far has been fantastic.”

Classico is expected to account for just 15% of sales with 45% Lusso and 40% Lusso Plus.

Once unclipped at the top of the windscreen, it can be folded away in seconds and is almost as quickly raised again.

Lusso Plus introduces a Bose sound system with speakers in the seat headrests which are a huge bonus for anyone wanting to make telephone calls on the move, making callers audible – even with the roof down.

Just one engine is available in the 124 Spider, a 1.4-litre turbocharged Fiat MultiAir unit delivering 140PS and 240Nm of torque – some 40Nm more than the more powerful MX-5 – to deliver performance claims of a 7.5-second dash to 62mph and 134mph.

But while the 44.1mpg fuel economy and 148g/km CO2 emissions sit between the Mazda’s claims of 47.1mpg or 40.9mpg and 139g/km or 161g/km, an indicated 31mpg on AM’s test drive showed it could be less frugal than the Japanese roadster.

The interior of the 124 Spider is near-identical to the MX-5 – a better-equipped offering than previous generations of Mazda sports cars with solid build quality – yet there are subtle ways in which Fiat has differentiated its sports car.

The option of a tan leather interior combines with several of the eight available colours (of which white is the only non-cost option) to add a distinctly Italian and Ferrari-esque appearance.

Elsewhere the instrument binnacle is a more round-edged affair than the Mazda’s, but functionality from the Lusso and Lusso Plus’ touchscreen infotainment system, via a rotary controller within the centre console or as a touchscreen when stationary, is very intuitive.

Carminati speaks of Fiat’s efforts to tune the 124 Spider’s double wishbone front and multi-link rear suspension to distinguish it from the MX-5 and that proves to be the case.

The Spider is less prone to roll in corners, settling more quickly over humps and imperfections, but remains a comfortable cruiser.

Refinement is impressive, the 1.4-litre turbocharged engine actually more audible with the roof in place, and the power’s delivery makes the 124 Spider easier to drive quickly than the rev-hungry, normally-aspirated MX-5.

An automatic gearbox option, due to be added to the line-up next year, is sure to broaden the 124 Spider’s appeal still further, while the harder edge of the MX-5 may appeal more to the enthusiast.

That said, Abarth promises to win petrolheads into the FCA Group with the Abarth 124 Spider, which features more focussed dynamics, a limited-slip differential and 168bhp from its turbocharged 1.4-litre MultiAir engine for £29,850.

Carminati feels that the Fiat strikes the better real-world balance, however.

He said: “Our dealers know that – more than ever before – they will be selling to, perhaps, two different kinds of customer and our training was tailored to take account of this.

“The sales training was split into two groups – the lifestyle customer and the petrolhead, and dealers know that they have to be equipped to deal with both sets of customers.”