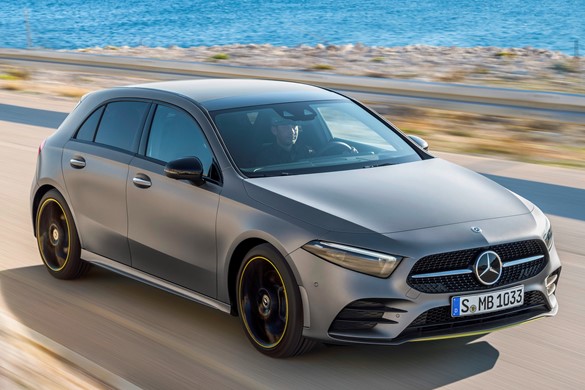 The third generation A-Class transformed the image of Mercedes-Benz following its 2012 launch.

Banishing memories of failed ‘Elk tests’ of the original 1997 car, the sporty design enticed a new generation of more youthful owners to the brand, lowering their average age by a full decade.

Given that success, it is perhaps surprising to hear Mercedes-Benz describe the new A-Class as “more grown-up” than its predecessor.

The car has certainly grown. With a longer wheelbase increasing interior space – leg, shoulder and elbow room – and a bigger boot (up 29 litres to 370 litres, slightly bigger than the BMW 1 Series and Audi A3), the A-Class becomes more practical as a small family car.

It has also matured in terms of both safety technology and multimedia. It has borrowed a lot from the S-Class, including a multi-function steering wheel and fully digital cockpit display, which for the first time in a Mercedes has a touchscreen interface.

The A-Class dispenses with the traditional binnacle, replacing it with a ‘floating’ widescreen digital display that stretches half the width of the dash and incorporates speedometer, RPM gauge and the sat-nav/infotainment.

All this ‘maturity’ does not come at the expense of sportiness – either in looks or driving enjoyment–and the car will still appeal to those more youthful in age or mind.

Drivers have the option of three engines from launch, one diesel and two petrol.

For the fleet buyer and retail customers craving the lowest running costs, the A 180 diesel is the pick of the bunch, featuring a new 1.5-litre unit, developed with Renault, which offers 116PS with WLTP (NEDC correlated) figures of 68.9mpg and 108g/km CO2.

The engine, with a seven-speed automatic gearbox, is highly refined, with no rumble even when starting from cold. It offers instant power as soon as the accelerator is pressed, while the car itself has ample grip and stability.

Mercedes-Benz expects the A180d to be the most popular among fleets, accounting for 60-70% of the anticipated 40,000-plus annual sales. Prices start at £25,800 for the SE, although most drivers will opt for the mid-trim Sport. The AMG Line completes the range.

From launch, the A180d is available with a seven-speed automatic gearbox; a six-speed manual will come later this year.

Although diesel is still expected to dominate sales, Mercedes-Benz also anticipates growing interest in the new 1.4-litre petrol (A200, priced from £27,500), which is another Renault co-development. It features cylinder deactivation, allowing it to run on just two cylinders for maximum efficiency.

Later this year, Mercedes-Benz will introduce a smaller 1.4-litre petrol (A180), while two new 2.0-litre diesels – A200 and A220 – with a nine-speed auto box will follow in Q1 2019. A mild hybrid is due shortly afterwards and a full electric vehicle will also come to market, although not for another couple of years.

Lane-keeping assist, speed limit assist and brake assist are among the standard safety features as Mercedes continues to make this one of its top priorities. It has also improved all-round visibility by 10% by reducing the pillar claddings.

Also of interest, to business users especially, will be the digital key, which facilitates car-sharing by multiple users by unlocking/locking doors via the Mercedes Me smartphone app (as long as the key is in the car). Journeys can be logged, with geo-fencing available, making it an ideal pool vehicle, especially for out-of-hours collection and drop-off.

Technology wizardry aside, one of the factors that will appeal most to drivers is the premium feel of the interior. It is several steps up from the outgoing A-Class, with soft leathers and tactile plastics making it more akin to models higher up in the Mercedes-Benz range.

However, that premium price tag does deliver improved quality, more technology, increased space and it is enjoyable to drive. The new A-Class is both grown-up and young-at-heart. STEPHEN BRIERS

How many A-Class models does Mercedes-Benz expect to sell in the UK during its first full year of registrations and what trim will be most popular?

We don’t reveal projected sales. Last year, we sold 43,717 A-Class models in the UK, and the most popular trim was AMG Line. We expect it to remain a popular trim.

The new A-Class contains many new features. Which standard specification highlights will win over buyers?

We think the new A-Class’s interior will be a big pull on its own. It’s unlike anything else in the class. The new A-Class also comes with lots of new standard features such as MBUX, the new infotainment system that is launched on the A-class, bringing with it an improved navigation system and a new user interface that incorporates the first touchscreen media display for Mercedes-Benz. The A-Class also introduces ‘Hey Mercedes’ voice activation.

Where do the key upsell opportunities lie for retailers?

We expect the Executive equipment line to be especially popular. This upgrades the central navigation screen to 10.25 inches, as well as adding Active Park Assist, heated front seats and electrically folding mirrors for just £1,395. For £2,395, customers can get the Premium equipment line, which contains everything in the Executive line and adds a second 10.25-inch screen, to give the full widescreen cockpit, as well as giving 64-colour ambient lighting, illuminated door sills, Keyless Go, an upgraded sound system and a rear armrest.

What will be the expected splits between retail:fleet and petrol:diesel in sales of the new A-Class and how might figures differ from the previous generation model?

Again, we won’t reveal any projected figures, but in the previous model, the splits were 47% private and 53% commercial. We expect to see a greater interest in petrol models in the future and have already seen a shift in the market towards this. Based on the market, we see the private channel offering the greatest opportunity but we also expect to see continued fleet growth.

How will the A-Class marketing campaign seek to reach new customers?

The New A-Class campaign will kick off in late June/July with the introduction on digital media and a national TV campaign.

When were retailers first introduced to the A-Class and how is their new vehicle sales/ technician training now delivered?

Training is scheduled to commence June/July for technicians. We have just completed global sales training for the A-Class in Europe and 1,500 sales executive and managers across the country have taken part to learn about the new exciting features of the A-Class. TOM SHARPE