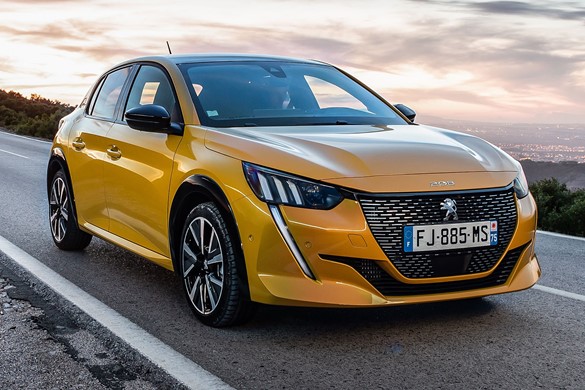 The arrival of the new Peugeot 208, which offers the option of a fully electric drivetrain in a familiar B-segment hatchback package, may drive yet another nail into the  coffin of the diesel supermini segment.

Nicola Dobson, Peugeot’s head of product, said the B-segment EV is expected to account for 10-20% of the new 208’s annual volume, up to four times higher than the diesel derivative’s market share.

But she would not reveal whether these registrations were expected to come in addition to its traditionally engined variants  – 15,195 to the end of October.

While its predecessor was the best small Peugeot supermini in decades, there was still room for improvement, and the new 208 delivers it.

The older car was nicely styled, but it featured quite a lot of less-than tactile plastic and felt behind the times in terms of technology. Addressing those issues is a noticeable uplift in the quality of materials used (although you can still find harder surfaces lower down), a padded dashboard, and a swathe of carbon fibre-effect material that is at the very least attention-grabbing.

A high-set seven-inch infotainment screen with Apple CarPlay and Android Auto takes care of most of the car’s functions, with a set of chrome, piano-style switches to help navigate its menus, as in the latest Peugeot products found elsewhere in the range.

The 10-inch version of the screen with in-built sat-nav, standard on the e-208 GT, has to be specified as an option on petrol or diesel trims.

While base-spec Active models get a set of analogue instrument dials, Allure and GT Line trims (plus the electric-only GT) feature a 3D digital display, which works a bit like an LCD dial screen but introduces several see-through layers, allowing less important information to be projected slightly behind things such as your speed. This works very well.

The biggest change to the new non-electric variants of the new 208 is the addition of a fast-shifting eight-speed automatic gearbox.

Customers can choose from three petrol engines – 75PS, 100PS or 130PS, all use PSA Group’s 1.2-litre, three-cylinder unit. The diesel line-up features a lone 1.5-litre engine with a single 100PS output, reflecting the waning appeal of what has now become a niche fuel choice in a supermini. Only 718  diesel-powered 208s were registered to the end of October 2019 (down from 1,407 the year before), accounting for less than 5% of total sales.

Peugeot said the mid-powered petrol is expected to be the best seller and it’s easy to see why when you get the chance to sample the new 208 range. It’s the best all-rounder thanks to the availability of automatic or six-speed manual gearbox and with 205Nm of torque provides enough mid-range shove for daily driving applications.

Peugeot claims a 9.9-second acceleration to 62mph in the manual car.

Retailers should be able to sell the 208 on its low running costs, whether customers are considering a combustion engine or the zero emission e-208 EV.

The petrol line-up ranges from 93-108g/km of CO2 across its broad spread of power outputs and gearbox choices, while the diesel offers 84-92g/km.

The diesel is a hard thing to recommend, though, due to the relatively inert way it deploys its power and the fact that you can get broadly the same emissions from the cheaper petrol car.

Of course, the best choice for tailpipe emissions is the e-208. Its 50kWh battery and motor combine to deliver 136PS and 211 miles of range.

Expect this to dip if you want to regularly experience the 8.1-second acceleration from 0-62mph.

Whichever 208 a customer chooses to take out of the dealership on a test drive, they can expect agile and alert steering and a ride that felt purposefully firm on our Portuguese test route.

That could become an issue in the UK, particularly in sportier GT and GT Line cars.

In terms of noise, though, it feels quite refined, with little wind whistle and quiet engines, particularly the virtually silent EV.

Elsewhere, comfort levels are good in front, but there is not a huge amount of leg or head room in the back.

The boot is a middle-of-the-road 311 litres whether you pick a conventional engine or the EV – more space than a Fiesta, but less than a Clio.

So will customers be lured away from the Ford Fiesta or Volkswagen Polo and into a new Peugeot 208?

Well, the last iteration was a proper return to form for Peugeot, with a broad appeal and unconventional looks that were instantly recognisable.

This 208 builds on that with an enhanced technology and driver assistance package, plus an all-electric model, and offers a style than none of its rivals can match.

It certainly looks more orthodox, but still manages to stand out in a world where car design seems to be rapidly converging.

What proportion of the overall annual sales is expected to be EVs?

Which of the new trim lines and engine combinations is expected to be the range’s biggest seller?

For customers walking into a Peugeot retailer, which changes to the new 208 are likely to make most impact?

The all-new 208 features a large chrome grille, which becomes body-coloured on the electric version, with signature ‘three-claw’ LED headlights. The front vertical daytime running lights, which also act as the vehicle indicators, add to the distinctive look, giving the impression of a lion’s tooth. The distinct rear of the vehicle features a gloss black strip connecting the LED ‘claw-effect’ lights, with the iconic Peugeot lion sitting above this in the centre. The interior benefits from the latest evolution of the i-Cockpit, featuring innovative three-dimensional hologram technology that puts information closer to the drivers’ field of vision to highlight potential hazards.

When were retailers first introduced to the car and when were they trained on the new technology it offers?

Our dealer network has received two separate allocations of virtual training, prior to our reservation and open-for-order activity. Key dealership staff were hosted in Amsterdam to experience the all-new 208 and e-208 in person. Following this, full in-class training and test drives will commence at the end of November and will run until mid-December, with dealer vehicles arriving in UK showrooms in January.

Is there anything new/innovative about the way the new 208’s marketing campaign will be conducted?

We have a lot of exciting ideas that we are working on that will be revealed in due course.