Audi A4 review - Lighter, leaner and a lot more luxurious 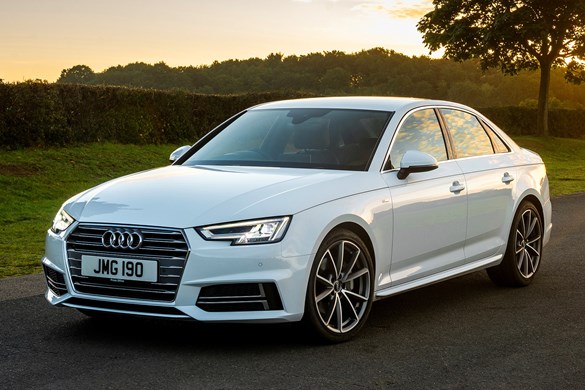 Audi promises that its A4 compact executive saloon provides an ownership experience in line with its flagship luxury limousine, the A8. The German manufacturer largely delivers on that promise and the A4 looks destined to remain Audi’s second-most in-demand model (after the A3).

With a model range starting at £25,900, the A4 isn’t quite as crammed with technology and luxury as its far more expensive biggest brother, but it is eerily quiet and refined on the road and an extremely fine place to spend a few hours.

The company car drivers who’ll account for 60% of its sales and who typically spend the equivalent of 42 days a year behind the wheel certainly will be pleased with their choice of car.

This A4 – tagged the B9 generation internally at Audi – is 25mm longer than the old model, and has a wheelbase 12mm longer. It doesn’t sound much, but it is noticeably more spacious for rear passengers and the extra length helps it to stand out from the A3 saloon. It also has 480 litres of boot space.

Audi UK head of product Ben Fish said: “The A4 is probably the only genuine premium car in this segment, with focus on quality of materials and getting the specification right for the customer. It should not be a compromise for the fleet driver, who expects good value running costs and great materials.”

All the A4 saloons fitted with four-cylinder engines have a BIK taxation range of 17-23% for company car users and CO2 emissions of less than 140g/km.

Audi claims the A4 has the most advanced on-board technology of any car its size. Entry-grade SE cars come with xenon headlamps with LED daytime running lights, three-zone climate control, rear parking sensors, keyless start, 17in alloys and cruise control. It also comes with an Audi smartphone interface that allows the driver to display smartphone data, such as navigation, on the car’s seven-inch screen.

“People look to have their own personality in their car and as they live and die by their smartphone, they do expect connectivity,” said Fish.

Half of all orders are expected to be for Sport trim, a £950 walk-up from SE. It gains integral MMI navigation with a three-month subscription to the online services and internet browsing provided by Audi connect. Other features include cloth sports seats, a sports steering wheel, an upgraded audio system and sporty exterior styling tweaks.

For a further £1,500, the customer can choose the top-spec S Line grade. Expected to appeal to 30% of buyers, it comes with 18in alloys, part-leather upholstered sports seats, LED headlamps and rear lights with dynamic indicators that illuminate in a progressive sweeping action. It also has sports suspension, although customers can choose the A4’s standard suspension at no cost, and distinctive bodystyling.

The crucial powertrain in the line-up is the 2.0-litre TDI, available in 148bhp ‘ultra’ guise and a 187bhp version. The 2.0 TDI ultra with six-speed manual specifically targets the business motorist, with official combined cycle fuel efficiency of 74.3mpg and CO2 of 99g/km.

That’s an improvement of almost 10% over the equivalent prior A4 and it puts it in the 17% band for BIK. It’ll cost nothing to tax annually either, but its list price of £29,150 in SE trim is £3,250 higher than the cheapest petrol-engined A4, which hosts a 1.4TSI turbo unit that also produces 148bhp. It is just as quick and manages 53.3mpg.

Although only offered in SE and Sport trim, this 1.4TSI could be the one to offer SMEs and company car drivers who have concerns about Audi’s recent emissions scandal and who won’t cover huge mileage.

The other powertrains on offer are an 187bhp 2.0-litre turbo petrol and a 248bhp version capable of reaching 62mph from standstill in under six seconds, so might appeal to the petrolhead family guy. It’s only offered with quattro all-wheel drive, but manages to keep CO2 emissions down to 136g/km so isn’t ruinous for VED taxation.

There are also two V6 diesels producing 215bhp or, in range-topping form, 269bhp. The performance diesel, like the sportiest petrol, is also only available with an eight-speed auto gearbox and quattro all-wheel-drive and is exclusively sold in S Line trim. At £38,950, this derivative is deep into the larger A6’s price bracket, but provides for those few customers who’ll want the ultimate A4.

What your customers will read about the Audi A4

Audi’s new A4 is impressive in all respects, but most notably for the hushed, slick and refined way it drives, as well as its overall ambience of sophistication.

For its passengers, the A4 does feel a little more spacious than most of its rivals. In the back, there’s more headroom than all except the BMW

3 Series, while up front, the A4 beats the 3 Series and matches the C-class. Go for an A4 Ultra, which is the super-frugal version with low-rolling-resistance tyres, and the fuel consumption figures are impressive, bettering those of every rival. There’s no downside to choosing one of these models, either, so they’re the ones to have.

The best A4 yet. The 3 Series is still a sharper drive, but the A4 leads the class for refinement and technology.