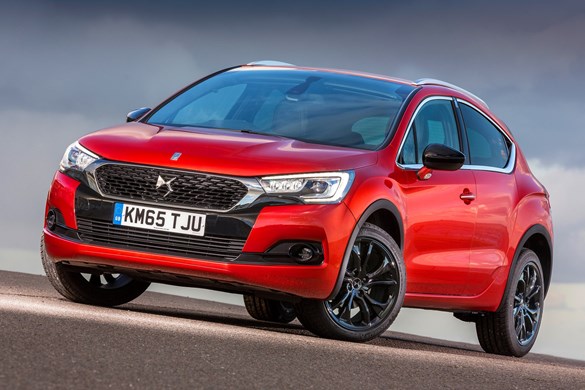 PSA Group’s introduction of a new DS4 and a rugged DS4 Crossback aims to broaden the appeal of the company’s premium brand as it pushes ahead with plans to distance it from Citroën.

The new models are the second and third in the  new crop of DSs (the DS5 launched in June 2015). They feature no Citroën branding and arrive months before the rebranding of dealerships across the UK and Europe.

More than 13,000 DS4s have been registered in the UK since the original model’s launch in 2011 and it is hoped that the new split offering – a rival to the likes of the Volkswagen Golf, Audi A3 and the Mercedes A-Class – will increase sales by appealing to a more diverse audience.

Both models sport a new design language, with a chrome ‘DS Wing’ grille and a new 86-light module headlight signature. Out goes the old car’s combination of coupé-like style and lofty driving position, to be replaced by a lower-slung, more dynamic theme in the standard DS4 and a crossover feel for the DS4 Crossback, which sits 30mm taller and features rugged detailing such as roof rails, distinguishing bumpers and black detailing.

Paris-based DS project manager Vincent Devos said: “It was clear that customers were very happy with the DS4 because it was premium, but different to many of its rivals. But we could see that others didn’t quite understand its mix of coupé, hatchback and SUV. That was very disturbing. In September 2014 we took the decision to create the Crossback, taking the DS4 range in two different directions.”

Next year, DS hopes to sell 4,000 DS4s, with Crossback models accounting for a quarter of those sales.

Elegance and Prestige levels of trim are available for the DS4, with prices ranging from £19,495 for the Elegance Puretech 130 S&S to £25,495 for a Prestige BlueHDi 180 S&S, fitted with an automatic six-speed gearbox.

Six engines are available across the two models, including the award-winning 1.2-litre, three-cylinder turbocharged petrol PureTech 130. Three BlueHDi diesel engines offering CO2 emissions as low as 100g/km and fuel efficiency of up to 74.3mpg are also offered, the most powerful of which is the BlueHDi 180, which combines 62mpg fuel economy with 178bhp and a class-leading 295ft-lb of torque.

The DS brand was born in 1955 and is renowned for being an early pioneer of innovations such as hydraulic suspension, disc brakes and cornering headlights.

Key to the new success of the brand, re-launched into a luxury market dominated by established German contenders in June last year, will be the success of its blend of comfort, personalisation and avant-garde luxury.

The DS4 can be tailored by customers to feature one of nine body colours, with four contrasting ‘bi-tone’ colours for the roof and wing mirror covers. The Crossback will be identified by black alloy wheels, wing mirror covers and badging.

DS’s UK product manager Alastair Fairgrieve said: “The colour options, optional alloy wheels and high-spec leather options are things we hope customers will embrace. In the past, selling options has not been one of our strong points, so that’s something we hope to change with the DS4.”

DS has become the first brand to introduce Apple CarPlay as standard into a complete new model range. All DS4s and DS4 Crossbacks include the technology – as well as the MirrorLink system for Android users – which projects a smartphone’s features onto the car’s seven-inch touchscreen. CarPlay can read and write text messages or guide users to a destination with Google Maps via spoken commands.

These features are delivered into an interior that is identical in DS4 and DS4 Crossback guise, with a sweeping soft-touch dash and panoramic windscreen. Five doors are standard, with concealed rear door handles, but the rear windows do not open. The boot is a spacious 380 litres.

It is clear to see the design-led new direction DS is taking and how it differs from what the premium market has offered. Ultimately, though, it will be the success of the new-look dealership network, a 0% APR PCP deal and the perception of added value that will determine the DS4’s success.

Fairgrieve said: “In the past, there were concerns that the DS brand’s vehicles were valued too highly and residual values were low. Now we’ve added a lot of value into the standard specifications and the RVs we’ve had from CAP have seen an uplift of between 3.5% and 4%, so we have high hopes.”