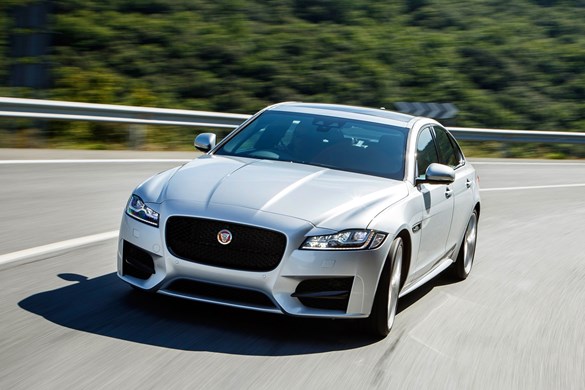 To improve on the success of the previous XF saloon, Jaguar had to do better than a predecessor that offered great looks, a great drive and great value. According to Jaguar product manager Dave Baker, this was relatively straightforward.

The product presentation at the XF’s recent introduction to many of the UK’s motoring press began in typically strident fashion. However, despite the success of its last iteration – 9,005 of the previous model XF sold in the UK during 2015 (1,972 of the new model sold since it went on sale in August) – it was clear there were areas that needed improvement if the XF were to become a market leader against rivals such as the Audi A6, BMW 5-Series and Mercedes E-Class.

UK sales director Chris Newitt had already acknowledged that Jaguar had to do more to entice fleet buyers with lower emissions, lower insurance groups and improved residual values. Baker claimed that the new car achieves all of these, along with added space and technology. Prices start at £32,300 for the 161bhp XF 2.0d Prestige and the line-up extends through R Sport, Portfolio and Prestige specifications before topping out with the £49,495 XF 3.0i V6 S, which is fitted with Jaguar’s 375bhp supercharged two-litre petrol engine and will reach 62mph in 5.3 seconds on the way to an electronically limited 155mph top speed.

The entry-level XF, equipped with Jaguar’s new Ingenium turbodiesel, best delivers the added fleet appeal of low fuel consumption and emissions. While qualifying owners for group 25 insurance, it also emits 104g/km of CO2 – down from 129g/km in the old 2.2 turbodiesel – and claims fuel efficiency of 70.6mpg when equipped with the manual gearbox rather than the optional eight-speed automatic. The entry-level diesel reaches 60mph in 8.7 seconds and has a top speed of 132mph.

Elsewhere in the range,  a 178bhp version of the Ingenium unit claims 65.7mpg and 114g/km in combination with a 7.7 seconds dash to 62mph and 136mph top speed while the 296bhp range-topping three-litre diesel delivers an uprated 516lb-ft of torque to reach 62mph in 6.2 seconds on the way to an electronically limited 155mph. Fuel consumption and emissions for that engine stand at 51.4mpg and 144g/km, respectively.

While the exterior of the XF has undergone a striking makeover – with the addition of sleeker, frowning all-LED headlight clusters and a rear more akin to its little brother, the XE – the interior is perhaps where the changes are felt most, with more space and Jaguar’s most ambitious infotainment system to date.

Although up to 190kg lighter than its predecessor and 7mm shorter, the new XF’s 2,960mm wheelbase is 51mm longer and liberates class-leading interior space, according to Jaguar. There is 15mm more legroom, 24mm more knee room and up to 27mm more headroom than before.

Among the standard features on all new XFs are Bluetooth phone connectivity, an eight-inch InControl touchscreen, which provides access to sat nav, DAB Radio and certain eco-driving tools and keyless entry, rain-sensing wipers and automatic headlights.

It also has cruise control and, due to new sensor technology and a link to the car’s electronic power steering, traffic sign recognition. Combined with a new intelligent speed limiter system, this can slow or speed up the car when a change of speed limit is detected.

While the new XF has the familiar rotary dial gear selector as its predecessor and the distinctive ‘Riva Hoop’ design feature, which arcs the full width of the car beneath the windscreen, a more layered dashboard and instrument binnacle are evident in the new car.

Jaguar’s technological advances are best illustrated by the 10.2-inch touchscreen of the optional InControl Touch Pro infotainment system, which costs from £1,225 and helps to bring the XF into line with its premium opposition as much as its lighter engineering and more efficient engines.

The new system was developed in-house by Jaguar Land Rover and brings the functions of a smartphone into the car.

InControl’s home screen can be customised just like a smartphone’s and a 3G connection will stream life-like satellite mapping to the sat nav as well as news feeds and weather. The system can even accept a sat nav route set up on a phone before reaching the car, streaming the data back to the handheld device for the final few yards on foot when the driver reaches their destination.

Despite all the technological advances, Baker said it was some of the most straightforward changes to the XF that may have proven key to the 40.86% residual value the new car has achieved in entry-level Prestige specification.

Baker said: “I was recently told in a meeting with CAP that the key things that determine the RV of a car are those that attract a buyer to the car when it passes through an auction. That’s going to be the basics like the styling, the wheels, the leather trim.

“With the RVs we’re achieving with this new batch of cars, it’s clear that we’ve achieved that instant appeal.”

What your customers will read about the Jaguar XF

Overall cabin quality is good, if still a step behind that of the Audi A6. However, it beats the Audi, BMW 5 Series and even the Mercedes E-Class for rear space. Jag says this is class-leading and it feels that way. The 540-litre boot also trumps its rivals.

The new Jaguar XF is a more than worthy rival to the usual exec saloon suspects: handling, space and frugality all impress, although we were disappointed by this particular model’s mooing engine, firm seats and a few iffier bits of interior trim.

Here at Autocar, we believe this version of the XF has the edge over the competition, particularly when it comes down to the actual driving element, leaving the BMW 5 Series, Audi A6 and Mercedes-Benz E-Class in its wake.