Smart has big hopes for its small cars 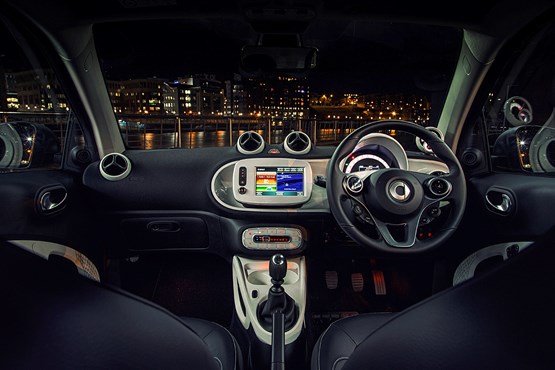 Smart, the small car brand from Daimler that sits in Mercedes-Benz’s shadow in 54 UK locations, has launched two models, which it hopes will tempt motorists away from fashionable cars such as the Mini hatchback and Fiat 500.

Sales of the previous generation Smart ForTwo city car averaged about 5,000 to 6,000 annually since its arrival 16 years ago, but the brand is expected to increase overall volume with the new cars, which include a crucial four-seater Smart ForFour that will compete in the supermini segment.

The new cars continue Smart’s premium positioning, with the ForTwo range priced from £11,125 and the bigger, more practical car, which the company says will account for 80% of annual UK sales, starting at £11,620. That the two-seater’s aspirations are so low is a signal that Smart understands its impracticality, yet it retains a cult following. The ForFour, in contrast, now gives the Mercedes-Benz network a chance to offer its customers a comparably modest priced second or third car of the household, thereby maintaining the brand relationship.

With the right marketing behind it (a TV and print campaign is already under way), the brand could begin its climb back towards Smart’s previous UK peak of almost 12,000 registrations in 2004, when it had a four-car range and an ill-fated plan by Daimler to grow sales to 25,000 units and to split Smart from Mercedes into separate standalone showrooms.

The previous ForFour, based on a Mitsubishi Colt platform, ended production in 2006, leaving Smart as a one-car brand. Now the model has been reborn, this time in a partnership with Renault. Renault already supplies Daimler with small engines for the  Mercedes-Benz A-Class, and now the German group has made use of the platform from the Renault Twingo and created the ForFour.

It’s a four-door supermini with space for four adults, with a rear bench seat that folds flat into the floor to create a maximum load capacity of 975 litres – slightly better than an Audi A1’s – and that can accommodate a 2.2-metre long Ikea flatpack if the front seat is also folded down. That is impressive for a car that’s only 3.5 metres long, some 25 centimetres shorter than the old ForFour. In normal use, the boot capacity is only 185 litres, a third smaller than the A1’s.

Customers can choose between a 71bhp, 1.0-litre engine that accelerates the car from rest to 62mph in 16 seconds, or a 90bhp turbocharged 0.9-litre unit which will do the same almost four seconds faster and which is far more suitable if they’re likely to take it onto motorways. Both engines are mounted at the rear, have a five-speed manual gearbox and start-stop and keep official CO2 emissions below 100g/km, meaning owners will pay nothing for VED and anyone using it as a company car will pay only 12% benefit-in-kind tax.

Smart says this is its most advanced and safest four-seater yet, with ultra-high-strength steel chassis structure, a tridion safety cell, seven airbags and systems such as crosswind assist and hill start assist all standard.

The three specification choices are called Passion, Prime and Proxy. Passion, from £11,620, comes with orange, black and grey interior, 15in alloys, climate control, cruise control, multifunction leather steering wheel and an audio system with USB connection and Bluetooth. An extra £795 gives the customer the choice between Prime and Proxy – the former with bi-colour 15in alloys, a panoramic glass roof, leather seats and heated front seats, while the latter has 16in black alloys, lowered sports suspension, sports steering wheel and leather-look/fabric seats with white and blue interior.

In addition, the sales executive can offer a Premium package on all three trims, which adds rear parking sensors, a 7in touchscreen with navigation and multimedia functions, heated electric door mirrors and height-adjustable driver’s seat and steering wheel. For Prime and Proxy models, a £1,295 Premium Plus package adds all the Premium features plus ambient lighting, front foglamps, Halogen headlamps and LED rear lights, auto wipers and lights and a rear-view camera.

“Small on the outside, big on the inside” is how the carmaker describes the new generation ForTwo. At just 2.7 metres long, it is a car that, like its predecessor, can fit nose to the kerb in on-street parking bays. Its second trick is its ability to u-turn  in a single carriageway road – its 22.8ft turning circle is two feet tighter than a London black cab. These, combined with official urban cycle fuel economy nearing 60mpg and zero VED due to its sub-100g/km CO2 emissions (it shares the same engines and trims as the ForFour), should make it any suburban commuter’s ideal shuttle into the city.

Yet it won’t appeal to all. Even though this city car is almost 11cm wider than its predecessor, the passenger’s arm will still get in the way of the gear lever and its 260-litre boot looks full with the addition of a couple of overnight bags. It’s not a car for the self-conscious either, as the ForTwo’s distinctive styling attracted plenty of attention during our test drive through Durham and Newcastle.

None of these will matter for customers who want to buy one, of course. The car will have sold itself before they even enter the showroom. Buying a Smart ForTwo is making a statement, a decision from customers’ hearts, not their heads. They’ll forgive its limitations.

What your customers will read about Smart cars

Honest John
In reality, the Forfour is noticeably shorter than a Ford Fiesta, so it never feels like a large car. If you like the Smart styling and urban capability, but the Fortwo’s lack of space has been off-putting, the Forfour is precisely what you’ve been looking for. The price is fairly steep though – rivals like the Volkswagen Up are just as practical and are as cheap to run, but cost less to buy.

Parkers
The Smart ForTwo is back and this time it means business. Priced above most of the usual city car suspects, it offers something a little different for sure. For those who don’t need the extra practicality of two more seats, the low running costs, fun and refinement of the ForTwo are sure to appeal.