A1 lives up to its name as a small premium car 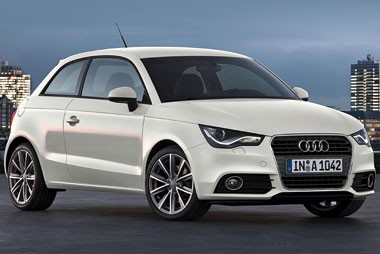 If the Audi A2 was rather too forward looking to be a huge success when it was launched in 2000 (not to mention expensive for Audi to build and for customers to buy), the new A1 perhaps captures the current mood more accurately.
It shares some components with Volkswagen Group small products resulting in a more conventional small car than the A2.

But it is also primed to take advantage of fuel-saving technology as well as a growing appetite for downsizing, especially among drivers of premium cars.

And it couldn’t have escaped Audi’s attention that its German rival BMW has been rather successful in reviving the Mini brand.

Available to order now, with deliveries starting in November, the A1 is currently only available as a three-door model (but don’t be surprised to see a five-door Sportback and hot S1 version in future) with a choice of 86bhp 1.2 TFSI or 122bhp 1.4 TSI petrol engines or a 105bhp 1.6 TDI diesel.

Both the 1.2 TFSI and 1.6 TDI come with five-speed manual gearboxes; the 1.4 TFSI has a six-speed manual as standard with a seven-speed S tronic dual-clutch gearbox as an option. All models benefit from fuel-saving start/stop technology.

The A1 feels as well finished as any other Audi. It’s nimble and whatever engine the buyer chooses, it should be comfortable on a motorway run.

The A1 gives drivers a true premium alternative to the Mini.
It stacks up very well on costs and should be desirable for many years
to come.

Daily Telegraph
The A1 is beautifully made and its cabin is the apogee of automotive design and assembly, but you would never consider driving this car for joy alone.

Evo magazine
The only rival that matters is the Mini Cooper. The Audi A1 is a more grown up car, bigger inside and even better built. It’s more sophisticated, but it’s also less playful.