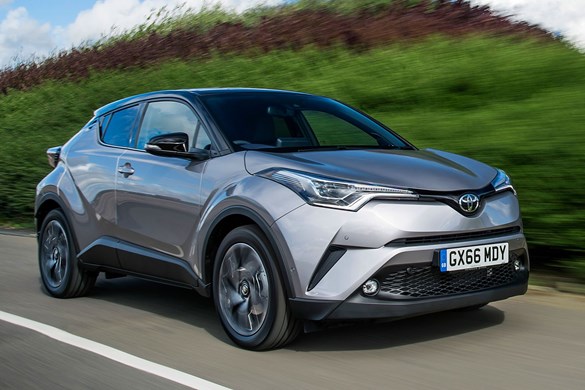 The medium SUV segment is one of the fastest-growing sectors in Europe. However, it is also becoming one of the most crowded.

Recent entrants include the Seat Ateca and Renault Kadjar, while the sector also features leviathans such as the Nissan Qashqai and Ford Kuga, posing the question: how can a manufacturer ensure its car stands out from its rivals?

Toyota’s answer is the C-HR. Standing for Coupé High Rider, the concept-car looks of the new model set it apart from its more conventionally styled competitors, something the manufacturer hopes will help win conquest sales.

Toyota GB’s president and managing director, Paul van der Burgh, said: “We see the C-HR as a car that will resonate with not only private buyers, but also fleet buyers.

“We also feel it can attract buyers from the premium segment, given its quality and characteristics.”

Early interest in the model supports this, he said. At the time of the car’s press launch in November, Van der Burgh reported that 81% of the 36,000 enquiries received were from customers of other brands.

The manufacturer expects to sell 16,000 C-HRs in the UK each year, with sales split 56:44 between retail and fleet customers. It forecasts C-HR sales will make up 15% of its overall registrations in the UK.

Like other models in the Toyota range, the  C-HR is not available with a diesel engine.

Instead, customers can choose from a 1.2-litre turbo petrol, producing 118PS with CO2 emissions from 134g/km and official fuel economy from 47.9mpg, or a 1.8-litre hybrid, which offers 122PS, CO2 from 86g/km and combined fuel economy from 74.3mpg.

All versions are covered by a five-year/100,000-mile new vehicle warranty. Standard servicing requirements are annually or every 10,000 miles, whichever falls earlier.

The hybrids carry a £1,300 to £1,400 premium over the equivalent 1.2-litre models, but Toyota still expects the petrol-electric powertrain to account for 70% of UK registrations.

Its low CO2 puts it in the 15% benefit-in-kind tax bracket, strengthening its appeal to company car drivers. From April, this rises to 17% as new tax bands are introduced.

Three trim levels on both powertrains are available. Van der Burgh  said: “In the UK, our buyers want specification, so all C-HRs are well equipped. We won’t have an ‘entry-level’ model.”

All C-HR models feature Toyota Safety Sense, a package of safety systems that can alert the driver to collision risks and intervene if necessary to avoid or mitigate the consequences of a collision.

Toyota expects registrations to be spread fairly evenly between trim levels: Excel and Dynamic are each expected to account for 35% of sales, with Icon the remaining 30%.

A number of optional packs are available, covering areas such as styling and entertainment features. The comprehensive equipment levels are supported by the high quality of materials used in the cabin, which reflects the bold styling of the car’s interior.

However, the C-HR’s concept-car looks restrict its practicality: it is not as roomy as the similarly sized Qashqai, while its wide C-pillars mean the rear side windows are small, restricting rear visibility. It can also make rear seat passengers feel hemmed in.

On the road, there is plenty to commend the C-HR. Toyota has said it engineered the car to drive ‘on par with a good C-segment hatchback’ rather than an SUV, and that is an accurate way to describe it.

While its road manners and the BIK tax status of the hybrid version add to its appeal, the C-HR’s looks will be key to its success,  something Toyota is confident of.

“We see the C-HR as giving us a real chance to win new customers,” said Van der Burgh.