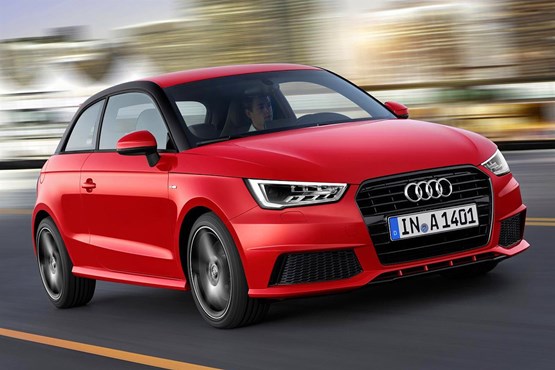 That Audi says 95% of customers for its A1 range are new to the brand is a signal of the compact hatchback’s importance. The car is bringing under-40 singletons and couples out of their high-level mainstream runabouts and introducing them to a premium brand experience, which Audi hopes will win their affection and ensure their brand loyalty for life.

It is also an important car for the UK dealer network, given that more A1s are sold here than in any other country – some 24,000 in 2013. Almost three in four are sold to retail customers.

The A1 range is just receiving its mid-life refresh, with exterior and interior styling tweaks, specification upgrades and, more importantly, improved engines. Replacing the 1.2-litre petrol unit of the existing model will be a newly developed 1.0-litre turbocharged three-cylinder unit, which is more powerful at 94bhp yet pulls CO2 emissions down to 99g/km and delivers  about 60mpg. The 1.6 TDI turbodiesel’s emissions drop from 99g/km to 93g/km and combined test cycle fuel economy rises to 80.7mpg from 74.3mpg. The remaining engine offering is a 1.4-litre TFSI turbocharged petrol four-cylinder with 124bhp and 115g/km or 148bhp and 112g/km thanks to cylinder-on-demand technology. Emissions improvements mean both have dropped one VED band lower than the current model.

Depending on version, all engines will be linked to either a five-speed or six-speed manual transmission as standard, and for the first time all, including the 1.6 TDI, will also be available with the £1,540 option of a seven-speed S tronic twin-clutch automatic transmission.

Visible changes to both the three-door and five-door Sportback versions of the A1 include a flatter and wider grille, new bumpers, new alloy wheel designs and a choice of new colours. The interior ambiance has been lifted even further by additional chrome and high-gloss black detailing, plus new upholstery colours and options including an Alcantara and leather blend.

Chris Batty, A1 product manager at Audi UK, said dealers will get their first cars around March, but are already taking orders and prospecting their databases. The 1.0-litre TFSI, predicted to be at least one in 10 orders, will be added to the range around June.

Batty said as this car is a buyer’s entry to Audi at relatively low cost, spend on options tends to be no more than 10% of the purchase price. However, Audi is keen to make it easy for sales executives to encourage option uptake. Popular upsell opportunities with the A1 include Tech and Comfort packs.

Classy looks, plenty of personalisation options, a cabin that beats anything in its sector hands down and a raft of cleaner, more frugal engines – including this hugely charismatic three-cylinder powerplant – means the revised Audi A1 remains the comfortable leader of its class in our eyes. The A1 represents an excellent entry route into Audi ownership.

Both the A1 and A1 Sportback were impressive models before, but these changes only add to their overall desirability. Don’t be put off by the 1.0 three-cylinder engine, it works surprisingly well in the A1, while the subtle styling changes give it a more grown-up look like that of the A3.