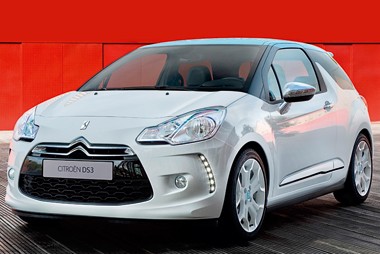 Citroën dealers should have a golden sales opportunity when the new DS reaches the showrooms next month.

Citroën is banning discounts on the classy little model spearheading the rebirth of DS, the iconic range that set the pace in the ’50s.

If the move proves a success, full-price trading will become the norm on other upmarket models with the DS nameplate due next year.

Boasting a likeable blend of performance and economy in a shape fronted by a distinctive LED lighting display and guaranteed to turn heads, the DS3 looks every inch a winner.

Created to take on the Mini and fully exploit the customisation trend, the sophisticated newcomer represents a golden opportunity in up-selling from no less than 38 combinations of bodywork and roof colours.

But that’s just the start. Though the price starts at £11,700, Citroën is confident a significant proportion of orders will nudge £19,000.

The DS3 will have a choice of six engines spanning 1.4 to 1.6-litres. Three of the petrol units have been developed with BMW, meaning some of the rivals have the same motors.

In the DSport we drove, power from the THP 150 unit flows freely to provide strong all-round performance via a silky six-speed gearbox.

Handling and crisp roadholding come to the fore in brisk progress and the generally smooth-riding DS delivers as much driving fun as its English rival in bodywork that provides roomier accommodation.

But how does it rate against the Mini overall? Great kerbside presence and quality make the new kid on the block a particularly appealing alternative.

The Independent
The DS brand gets off to a credible start. The DS3 looks good, feels good and is great fun to drive. Best of all, Peugeot-Citroën’s engineers have got their fun-car mojo back.

Autocar
It’s not an easy journey for a company to decide it’s going to ‘do premium’. But the DS3 is a thoroughly positive start, a genuinely good product and quite a tempting one.