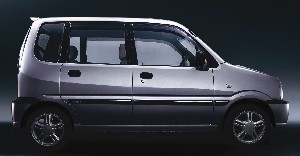 Malaysia’s Perodua has made huge mileage out of its ratings in the CAP running costs league – its Kancil/Nippa city runabout (replaced in 2002 by Kelisa) consistently claiming the title of Britain’s cheapest car to run over the fleet cycle of three years or 60,000 miles.

The cheap and cheerful tag is now firmly attached to any Perodua product, even though after careful comparison of OTR price, equipment levels and fuel efficiency may not necessarily compute to the least expensive in its class to buy.

Its five-door mini-MPV Kenari, for instance, launched here in 2000 and facelifted last summer, is still marketed on delivered price (£6,130) rather than OTR (£6,226), a subtle ploy that would seem to give it the edge over perceived rivals. In fact, several sub 1,000cc superminis and mini-MPVs give Kenari a run for its money. The strategy sounds like smart marketing, but that’s not reflected in UK sales figures – June’s results showed a 20.88% drop against June 2003 from 91 to 72 units, and year-on-year downturn of 13.9% from 482 to 415 registrations.

The automatic Kenari EZ we tested sells for just over £7,000. There is other choice for that money, but few come close to the packet of agility, economy and practicality it offers. Shave a few more hundreds off the asking price, however, and the package would be unbeatable.

Entering the super-mini segment is not an easy task, but Malaysian maker Perodua realizes the public’s perception and is keen to dispel it.