The obvious talking point for the TwinTop is its wonderful roof design. Unlike many coupé-cabrios, this car looks great with the roof up.

But with the flick of a switch, or by holding the button down on the key fob, the roof puts itself down in 26 seconds.

That’s slower than the 22-second Mégane CC, but similar to the Peugeot 307 and Volkswagen Eos times.

It really is a delight to watch – the whole mechanism uses five motors, eight hydraulic cylinders and 13 sensors, but you’d swear it was more.

The side windows drop; the boot lid lifts upwards while the front of the roof rises; then the three roof sections slide into position over one another before disappearing into the boot area; finally, the windows return to their original place. Marvellous.

This roof can be put up or stowed away at speeds of up to 18mph, which comes in surprisingly handy. In slow moving traffic, or stuck at a junction, you can react to the slightest drop of rain, or a break in the clouds – or simply show off to the other car drivers around you.

But enough waxing lyrical about the roof: there are some downsides. It is a fantastic idea to be able to hold a button down on the key fob to control the mechanism from afar, but it doesn’t run as smoothly as when you press the button on the windscreen surround.

Plus, during one demonstration of putting the roof up, a piece of rubber surround got caught between the first and second parts of the roof, preventing the whole thing from closing as it should.

The other concern is the multitude of things that could potentially go wrong; it’s enough to put an apprentice off from working for Vauxhall. Could a broken roof be enough to write-off a TwinTop in years to come?

Inside the car it is, well, typically Vauxhall. The company is not renowned for its innovative interiors – and the Astra TwinTop sticks firmly with the tradition of dashboards that are alright, but a bit boring.

That said, it was hard to see past the combination of black plastics and Saddle Brown leather (£750 for Leather Pack). Inside Vauxhall’s brochure, it states that when deciding what leather or cloth trim you want: “It’s all on view, don’t forget. So choose carefully!” Wise words indeed, so who’s great idea was it to put a ‘striking’ brown colour with black?

The interior is roomy and comfortable for two. Rear space is better than you would expect, but it’s children-sized rather than four hefty adults when the top is up.

It’s rare that a stereo is worth a comment, but the CD70 really is good (£1,250 option with colour sat-nav). The sound comes at you from all directions, and is more than up to the job of being heard on windy days with the roof down.

This will be a tempting choice all year round, and it will be interesting to see how sales cope over winter months. Vauxhall expects to sell 2,275 before 2006 is over, and 4,400 throughout 2007. That’s up on its original 3,500 sales forecast.

The 16v 1.8-litre petrol engine is smooth and makes for an enjoyable drive. It’s coupled to a five-speed gearbox, which makes overtaking simple enough.

There is very little scuttle shake with this car; it feels sturdy and corners confidently. There is a Sport button, which should sharpen the throttle response and improve the feel of the steering, but it didn’t have a noticeable effect. TwinTop is more of a cruiser than a sports car.

The leather seats, while looking a bit lairy, are comfortable. This car is a real grower – make sure prospects get a long test drive. 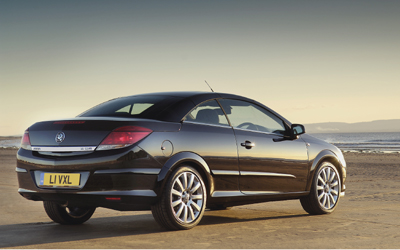